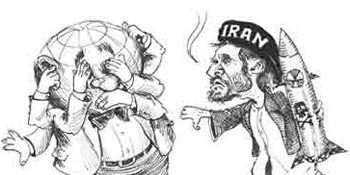 Prime Minister Benjamin Netanyahu accused Iran and Hezbollah of being behind Monday’s double terror attack on the Israeli embassies in India and Georgia.

Earlier, an explosion hit an Israeli diplomatic car near the embassy in New Delhi, injuring the wife of a diplomat stationed with the Defense Ministry’s mission in India. In Georgia, an explosive device was found in a Tbilisi embassy employee’s car and was neutralized safely.

The coordinated attack is believed to be linked to the fourth anniversary marking the assassination of Hezbollah arch-terrorist Imad Mugniyah.

Netanyahu, discussing the recently foiled attempts to target Israelis in Thailand and to harm the Israeli ambassador in Azerbaijan, told the Likud faction that, “We have been able to thwart such attacks with the cooperation of local authorities. In all cases, Iran and its protégé Hezbollah were behind the attempts.

“Today we witnessed two more terror attacks – in India and Georgia,” he continued. “Iran, which is behind these two attacks, is the world’s largest terror exporter. The government of Israel and its security services will continue to cooperate with local authorities against Iran-sponsored global terror.”

Foreign Minister Avigdor Lieberman was briefed on the events in Georgia and India immediately. “Israeli diplomats are on the front lines,” he said, adding that Israel “knows how to identify those who are responsible for the blast.”

The Foreign Ministry has ordered Israeli missions worldwide on high alert. Given the nature of the attacks Israeli diplomats have been advised against travelling in cars in the immediate future.