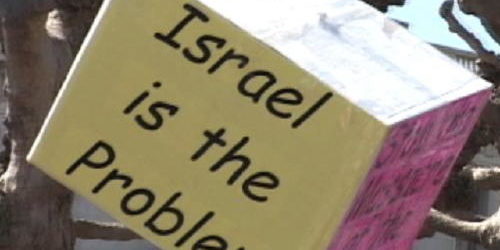 We really shouldn’t be surprised that Iran’s supreme leader Ayatollah Ali Khamenei only recently released a new doctrine explaining why it would be ‘legally and morally justified’ to commit genocide and wipe Israel off the map. “Israel is a cancerous tumor in the Middle East,” Khameini wrote for the ultraconservative Farsi-language Alef news site. “Israel is a satanic media outlet with bombers. Every Muslim is required to arm themselves against Israel.” In short, despite his public claims that it is the moral obligation of every Muslim to destroy Israel and commit genocide against all Jews, nobody in the international community, none of the leading human rights organizations, not the New York Times nor any other known liberal outlet in the digital world has demanded that the ruling regime in Iran be perceived as an unacceptable apartheid regime harboring and based on explicit Anti-Semitism inherently illegitimate and has no right to exist.

Hatred of Jews, demonization of Israel, anti-Semitism and anti-Zionism have all become interchangeable and analogous terms; acceptable politically correct superlatives in the public discourse in recent years. We hear it everywhere, whether from the mouths of Arab leaders, European organizations, academicians in the United States and Europe, and from leading journalists exercising their right of “free speech”, they all have elevated the hatred of Jews to socially acceptable. What we are witnessing without even realizing is the creation of an emerging new world order that is based on ridding the whole world of Jews. Sound familiar?

This narrative of making the hatred of Jews politically correct is being effectively conveyed by the Western media, bloggers, and NGO’s, in which Jews and Israel are being singled out and denied the basic right to exist, demonizing and de-legitimizing our very existence.

The current epidemic of primal hatred of Jews developed from the link between Nazism and Islam that was established in the 1930s. For example, in a Nazi directive of 1943: “The extermination of Jewry throughout the world is the precondition for an enduring peace”. Such a statement is remarkably similar, if not identical, to the statements made by the leader of Iran, Ahmadinejad who proclaims at every opportunity “the Zionist regime will be wiped out and humanity liberated”. The common thread unifying the desire for the total destruction of Jews is shared by Islamic terror and Hitler, hence the validity of the term Islamo-Nazism. It is not a coincidence that both German Nazism and modern Islamism arose in the 1920s. Nazi’s spoke of redemptive anti-Semitism, namely a form of anti-Semitism that explains all in the world and offer a form of “redemption” by exterminating the Jews and ridding the world of all Jews. Modern radical Islamism provides the same rational for murdering Jews and Israeli’s in particular.

Redemptive anti-Semitism is the connecting thread between World Jihad, the Islamic takeover of the Middle East, haters of Israel in the West, in the media, and in the Campuses of America and Europe. This common and united hatred of Jews and Israel has left behind any attempt to hide or diminish their public hatred of Jews and Israel using unlimited resources to make it OK and politically correct to call for the destruction of Jews and Israel. In our morally relative world logic is suspended; and an entirely poisonous narrative of wanting to rid the world of Jews and Israel is now widely accepted as politically correct. Victim and victimizer, truth and lies, justice and injustice turn into their precise opposite This has led to a kind of public dialogue among anti-Semites and has found expression in the writings of mainstream journalists similar to what has been written in recent months by “Uncle Tom” Friedman.

What is remarkable for most of us, is that instead of rejecting the elevation of the hatred of Jews to being politically correct, many Jews and non-Jews belonging to the progressive intelligentsia have largely embraced it as rational and true. To a large extent this is because that same western intelligentsia has itself supplanted rationality by an ideology of hatred. Not only do they hate Jews and wish to rid the world of Israel, but they do so while accepting financial support and backing from organizations and countries that employ the systematic killing of civilians and glorify the of murder of innocents. This is a very dangerous precedent and combination leading to the possibility that the streets of Western countries will become unsafe for Jews, a phenomenon that already exists and is widespread in the streets of European cities.

The gateway has been opened for the flooding of words and innuendo’s accepting the hatred of Jews and Israel as acceptable discourse in the public media. What seemed to have been an eradicated and forgotten ideology such as redemptive anti-Semitism has risen from the ashes of the Holocaust making the hatred of Jews and Israel once again a force that will lead to an inevitable clash between the forces of good and evil, between freedom and blind obedience. Anti-Semitism has become far more acceptable in the US and throughout the world. The volume of attacks against Jews has skyrocketed and the intellectual war against Israel and its Jewish supporters has grown ever more virulent. Now is the time to reject the politically correct anti-Semitic hatred of Jews and Israel.

Ron Jager, a 25-year veteran of the I.D.F., served as a field mental health officer and Commander of the Central Psychiatric Military Clinic for Reserve Soldiers at Tel-Hashomer. Since retiring from active duty, he provides consultancy services to NGO’s implementing Psycho trauma and Psychoeducation programs to communities in the North and South of Israel and is a strategic advisor to the Director of the Shomron Liaison Office.