As US and Israel dicker over Iran strike, America airlifts strength to the Gulf 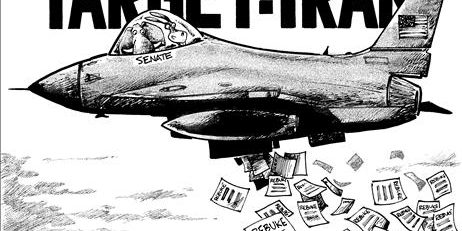 As the US and Israel carried on bickering over the right time to strike Iran’s nuclear sites, their war preparations continued apace. debkafile’s military sources report that flight after flight of US warplanes and transports were to be seen this week cutting eastward through the skies of Sinai on their way to Gulf destinations, presumably Saudi Arabia, at a frequency not seen in the Middle East for many years.

The three International Atomic Energy inspectors who spent the last three days of January in Tehran had asked to meet the hitherto invisible head of Iran’s nuclear bomb program, Mohsen Fakhrizadeh, 50, a general of the Revolutionary Guards. The Iranians pretended to be deaf. They also kept the inspectors away from any nuclear installations. A senior Obama administration official termed the visit “foot-dragging at best and a disaster at worst.”

debkafile’s intelligence and military sources note that without talking to Fakhrizadeh or any of the 600 nuclear engineers and scientists working under him, unless one of them defects, there is no way the West can determine what exactly is going on in Iran’s nuclear program stands and which installations have been moved to underground facilities.

No one doubts now that advanced centrifuges and stocks of enriched uranium – 3.5 percent and 20 percent grades alike – have been moved to Iran’s underground bunker site at Fordo near Qom, which the US administration has claimed its bunker buster bombs cannot reach and which Israel’s Defense Minister Ehud Barak has defined as “a zone of immunity.”

In their ongoing argument with Jerusalem, American officials commented crossly this week that “Israelis are looking at the problem too narrowly.”

Clearly Israel, unlike America, envisions the Iranian “problem” from the narrow viewpoint of potential victim of an Iranian attack. Sunday, Feb. 5, Alireza Forghani, head of the Supreme Leader Ayatollah Ali Khamenei’s strategic team, was quoted as remarking, “It would only take nine minutes to wipe out Israel.”

The remark came from a just-published detailed and serious paper by an Iranian study group which advised Tehran not to wait to be attacked but to launch a preemptive strike against the Jewish state.

Wiping Israel out in 9 minutes would require a nuclear weapon. It therefore behooves Israel to narrow its vision and focus closely on Iran’s nuclear potential and intent.

By now, the Obama administration and the Netanyahu government have pretty well run out of semantic ammunition for their dingdong over how long to wait for sanctions to bite before going on the military offensive against Iran’s nuclear sites and who should do the deed.

Prime Minister Binyamin Netanyahu plans a trip to Washington in March and will almost certainly get together with President Barack Obama.  That is a date to watch.

Israel leaders have not given up warning that time is running out for a military strike that could stop Iran from developing nuclear weapons. Obama’s comment to NBC TV Sunday Feb. 4, “I don’t think that Israel has made a decision on what they need to do,” has been interpreted by some circles in Washington as meaning that Israel has agreed to wait long enough to give tough sanctions a chance.

debkafile’s sources say that interpretation is wishful thinking rather than based on fact. The president’s comment was another attempt to keep Israel within certain lines of restraint.