America and the Arab Spring 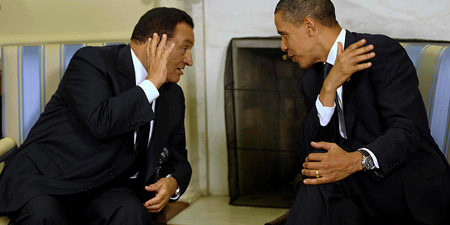 A year ago this week, on January 25, 2011, the ground began to crumble under then-Egyptian president Hosni Mubarak’s feet. One year later, Mubarak and his sons are in prison, and standing trial. This week, the final vote tally from Egypt’s parliamentary elections was published. The Islamist parties have won 72 percent of the seats in the lower house.

The photogenic, Western-looking youth from Tahrir Square the Western media were thrilled to dub the Facebook revolutionaries were disgraced at the polls and exposed as an insignificant social and political force.

As for the military junta, it has made its peace with the Muslim Brotherhood. The generals and the jihadists are negotiating a power-sharing agreement. According to details of the agreement that have made their way to the media, the generals will remain the West’s go-to guys for foreign affairs. The Muslim Brotherhood (and its fellow jihadists in the Salafist al-Nour party) will control Egypt’s internal affairs.

This is bad news for women and for non-Muslims. Egypt’s Coptic Christians have been under continuous attack by Muslim Brotherhood and Salafist supporters since Mubarak was deposed. Their churches, homes and businesses have been burned, looted and destroyed. Their wives and daughters have been raped. The military massacred them when they dared to protest their persecution.

As for women, their main claim to fame since Mubarak’s overthrow has been their sexual victimization at the hands of soldiers who stripped female protesters and performed “virginity tests” on them. Out of nearly five hundred seats in parliament, only 10 will be filled by women.

The Western media are centering their attention on what the next Egyptian constitution will look like and whether it will guarantee rights for women and minorities. What they fail to recognize is that the Islamic fundamentalists now in charge of Egypt don’t need a constitution to implement their tyranny. All they require is what they already have – a public awareness of their political power and their partnership with the military.

The same literalist approach that has prevented Western observers from reading the writing on the walls in terms of the Islamists’ domestic empowerment has blinded them to the impact of Egypt’s political transformation on the country’s foreign policy posture. US officials forcefully proclaim that they will not abide by an Egyptian move to formally abrogate its peace treaty with Israel. What they fail to recognize is that whether or not the treaty is formally abrogated is irrelevant. The situation on the ground in which the new regime allows Sinai to be used as a launching ground for attacks against Israel, and as a highway for weapons and terror personnel to flow freely into Gaza, are clear signs that the peace with Israel is already dead – treaty or no treaty.

EGYPT’S TRANSFORMATION is not an isolated event. The disgraced former Yemen president Ali Abdullah Saleh arrived in the US this week. Yemen is supposed to elect his successor next month. The deteriorating security situation in that strategically vital land which borders the Arabian and Red Seas has decreased the likelihood that the election will take place as planned.

Yemen is falling apart at the seams. Al-Qaida forces have been advancing in the south. Last spring they took over Zinjibar, the capital of Abyan province. In recent weeks they captured Radda, a city 160 km. south of the capital of Sana.

Radda’s capture underscored American fears that the political upheaval in Yemen will provide al- Qaida with a foothold near shipping routes through the Red Sea and so enable the group to spread its influence to neighboring Saudi Arabia.

Al-Qaida forces were also prominent in the NATO-backed Libyan opposition forces that with NATO’s help overthrew Muammar Gaddafi in October. Although the situation on the ground is far from clear, it appears that radical Islamic political forces are intimidating their way into power in post-Gaddafi Libya.

Take for instance last weekend’s riots in Benghazi. On Saturday protesters laid siege to the National Transitional Council offices in the city while Mustafa Abdul-Jalil, the head of the NTC, hid inside. In an attempt to quell the protesters’ anger, Jalil fired six secular members of the NTC. He then appointed a council of religious leaders to investigate corruption charges and identify people with links to the Gaddafi regime.

In Bahrain, the Iranian-supported Shi’ite majority continues to mount political protests against the Sunni monarchy. Security forces killed two young Shi’ite protesters over the past week and a half, and opened fired at Shi’ites who sought to hold a protest march after attending the funeral of one of them.

As supporters of Bahrain’s Shi’ites have maintained since the unrest spread to the kingdom last year, Bahrain’s Shi’ites are not Iranian proxies. But then, until the US pulled its troops out of Iraq last month, neither were Iraq’s Shi’ites. What happened immediately after the US pullout is another story completely.

Extolling Iraq’s swift deterioration into an Iranian satrapy, last Wednesday, Brig.-Gen. Qassem Suleimani, the commander of Iran’s Revolutionary Guards Corps Jerusalem Brigade, bragged, “In reality, in south Lebanon and Iraq, the people are under the effect of the Islamic Republic’s way of practice and thinking.”

While Suleimani probably exaggerated the situation, there is no doubt that Iran’s increased influence in Iraq is being felt around the region. Iraq has come to the aid of Iran’s Syrian client Bashar Assad who is now embroiled in a civil war. The rise of Iran in Iraq holds dire implications for the Hashemite regime in Jordan which is currently hanging on by a thread, challenged from within and without by the rising force of the Muslim Brotherhood.

Much has been written since the fall of Mubarak about the impact on Israel of the misnamed Arab Spring. Events like September’s mob assault on Israel’s embassy in Cairo and the murderous cross-border attack on motorists traveling on the road to Eilat by terrorists operating out of Sinai give force to the assessment that Israel is more imperiled than ever by the revolutionary events engulfing the region.

But the truth is that while on balance Israel’s regional posture has taken a hit, particularly from the overthrow of Mubarak and the rise of the Muslim Brotherhood and the Salafists in Egypt, Israel is not the primary loser in the so-called Arab Spring.

Israel never had many assets in the Arab world to begin with. The Western-aligned autocracies were not Israel’s allies. To the extent the likes of Mubarak and others have cooperated with Israel on various issues over the years, their cooperation was due not to any sense of comity with Jewish state. They worked with Israel because they believed it served their interests to do so. And at the same time Mubarak reined in the Muslim Brotherhood and Hamas because they threatened him, he waged political war against Israel on every international stage and allowed anti-Semitic poison to be broadcast daily on his regime-controlled television stations.

Since Israel’s stake in the Arab power game has always been limited, its losses as a consequence of the fall of anti-Israel secular dictatorships and their replacement by anti-Israel Islamist regimes have been marginal. The US, on the other hand, has seen its interests massively harmed. Indeed, the US is the greatest loser of the pan-Arab revolutions.

TO UNDERSTAND the depth and breadth of America’s losses, consider that on January 25, 2011, most Arab states were US allies to a greater or lesser degree. Mubarak was a strategic ally. Saleh was willing to collaborate with the US in combating al- Qaida and other jihadist forces in his country.

Gaddafi was a neutered former enemy who had posed no threat to the US since 2004. Iraq was a protectorate. Jordan and Morocco were stable US clients.

One year later, the elements of the US’s alliance structure have either been destroyed or seriously weakened. US allies like Saudi Arabia, which have yet to be seriously threatened by the revolutionary violence, no longer trust the US. As the recently revealed nuclear cooperation between the Saudis and the Chinese makes clear, the Saudis are looking to other global powers to replace the US as their superpower protector.

Perhaps the most amazing aspect to the US’s spectacular loss of influence and power in the Arab world is that most of its strategic collapse has been due to its own actions. In Egypt and Libya the US intervened prominently to bring down a US ally and a dictator who constituted no threat to its interests. Indeed, it went to war to bring Gaddafi down.

Moreover, the US acted to bring about their fall at the same time it knew that they would be replaced by forces inimical to American national security interests. In Egypt, it was clear that the Muslim Brotherhood would emerge as the strongest political force in the country. In Libya, it was clear at the outset of the NATO campaign against Gaddafi that al-Qaida was prominently represented in the antiregime coalition. And just as the Islamists won the Egyptian election, shortly after Gaddafi was overthrown, al-Qaida forces raised their flag over Benghazi’s courthouse.

US actions from Yemen to Bahrain and beyond have followed a similar pattern.

In sharp contrast to his active interventionism against US-allied regimes, President Barack Obama has prominently refused to intervene in Syria, where the fate of a US foe hangs in the balance.

Obama has sat back as Turkey has fashioned a Syrian opposition dominated by the Muslim Brotherhood, and the Arab League has intervened in a manner that increases the prospect that Syria will descend into chaos in the event that the Assad regime is overthrown.

Obama continues to speak grandly about his vision for the Middle East and his dedication to America’s regional allies. And his supporters in the media continue to applaud his great success in foreign policy. But outside of their echo chamber, he and the country he leads are looked upon with increasing contempt and disgust throughout the Arab world.

Obama’s behavior since last January 25 has made clear to US friend and foe alike that under Obama, the US is more likely to attack you if you display weakness towards it than if you adopt a confrontational posture against it. As Assad survives to kill another day; as Iran expands its spheres of influence and gallops towards the nuclear bomb; as al- Qaida and its allies rise from the Gulf of Aden to the Suez Canal; and as Mubarak continues to be wheeled into the courtroom on a stretcher, the US’s rapid fall from regional power is everywhere in evidence.