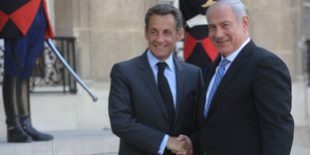 According to Netanyahu, who spoke at an afternoon Likud faction meeting, it is still too early to predict the outcome of the sanctions, but emphasized the importance of continual pressure on Iran in light of “its continual, uninterrupted development of nuclear weapons.”

“We believe these sanctions will be imposed quickly in order to put the Iranian leadership to the test,” Barak said.

After months of threats and pleas, the European Union finally adopted an oil embargo against Iran Monday, voting unanimously to up the ante by adopting the most sweeping sanctions yet against the Islamic Republic.

The new measures include a freeze of the assets of the country’s central bank, a prohibition on trade in gold, diamonds and precious medals with the bank and Iranian public bodies, and most significantly, an immediate embargo on new contracts for crude oil and petroleum products.

The EU imported some 600,000 barrels of Iranian oil per day last year, according to the International Energy Agency, making it a key market for Iran, alongside China.

Bowing to pressure from Greece, and several other countries heavily dependent on low-priced Iranian oil, the 27 foreign ministers conceded that existing oil contracts would be allowed to run until July.

Diplomats in Brussels said that EU foreign ministers would officially adopt the measures, hashed out by member countries’ 27 ambassadors, later on Monday. The measures include an immediate embargo on new contracts with Tehran for crude oil and petroleum products, while existing ones must be brought to an end by July 1.

The EU also approved fresh travel bans and asset freezes over the Syrian regime’s
opposition crackdown. The foreign ministers are expected to approve sanctions against the central bank of Iran, although they may provide a list of specific exemptions to the restrictions.

EU Foreign Policy Chief Catherine Ashton said she hoped financial sanctions would persuade Tehran to return to negotiations with Western powers, which she represents in talks with Iran.

“I want the pressure of these sanctions to result in negotiations,” she told reporters before the ministers’ meeting. “I want to see Iran come back to the table and either pick up all the ideas that we left on the table last year, or to come forward with its own ideas,” she said.

Ali Fallahian, a senior Iranian politician said in response on Monday that Iran should halt all oil sales to the European Union immediately to disrupt plans for the embargo.

Tehran denies its nuclear program is aimed at developing weapons, saying it is for peaceful purposes, but the United Nations’ International Atomic Energy Agency said last year it had evidence that suggested Iran had worked on designing a nuclear weapon.

EU sanctions follow fresh financial measures signed into law by U.S. President Barack Obama on New Year’s Eve and mainly targeting the oil sector, which accounts for some 90 percent of Iranian exports to the EU. The European Union is Iran’s second-largest oil customer, after China.

Diplomats said EU governments plan to return to the issue of oil sanctions in May to review the impact of the ban and its economic impact on their economies.

A U.S. aircraft carrier sailed through the Strait of Hormuz and into the Gulf without incident on Sunday, a day after Iran backed away from an earlier threat to take action if an American carrier returned to the strategic waterway.

The carrier USS Abraham Lincoln completed a “regular and routine” passage through the strait, a critical gateway for the region’s oil exports, “as previously scheduled and without incident,” said Lieutenant Rebecca Rebarich, a spokeswoman for the U.S. Fifth Fleet.