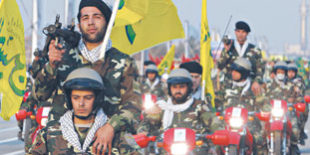 The ex-CIA director said the U.S. should consider these military options if Iran blocks the strategic Strait of Hormuz waterway or takes other significant aggressive action.

Woolsey also recommended that President Obama immediately send four to five aircraft carriers to the Indian Ocean to demonstrate U.S. resolve in the face of Iranian threats to blockade the straight.

“We went to war in 1812 over something just about like what Iran says it is going to do – close the straights,” said Woolsey, referring to the British naval blockade of the Atlantic coast of the U.S.

While applauding the recent round of tougher sanctions against Tehran, Woolsey contended such economic initiatives combined with continued dialogue are not enough to deter Iran from seeking nuclear weapons or halt the country’s threats to blockade the straight.

To counter those threats, Woolsey said Obama should emulate the actions of Teddy Roosevelt, who dispatched the United States Navy battle fleet, known as the Great White Fleet, to circumnavigate the globe for two years in a show of American strength.

Woolsey said he drew up the battle plan with Robert McFarlane, who served as President Reagan’s national security adviser from 1983 to 1985. Woolsey served as CIA director during the Clinton administration from 1993 to 1995, and now chairs the Foundation for Defense of Democracies.

“Militarily, we draw a parallel between what Teddy Roosevelt said between speaking softly and carrying a big stick,” Woolsey told Klein today of his military strategy. “Our idea is that we should make sure that we reinforce heavily the carrier taskforces, say in the Indian Ocean, not inside the Persian Gulf itself, very closed water and hard to maneuver and get space and range and get away from some of these relatively short-range Iranian missiles.”

“But in the Indian Ocean itself, at least four – I would hope for five or more – aircraft carrier battle groups with long range attack aircraft and smart weapons on them, and the same on B2s and B1s and some of the B52s,” he suggested.

Woolsey said Obama should make clear to Iran through back channels that “if there is a closing of the Straight of Hormuz or if there is any other aggressive action by Iran,” the U.S. will take immediate military action.

“One should let them know we could strike their nuclear installations,” he said, “but that’s not all we should go after if there is a necessity of using force.”

Woolsey described a multi-pronged U.S. military campaign that would target the Iranian Revolutionary Guard infrastructure with the goal of annihilating the Guards as a political and military force inside Iran.

He continued, “So anything that is related to the thugs that are oppressing the Iranian people, namely the Revolutionary Guard, should be fair game.”

Woolsey said the U.S. should also support the pro-Democratic opposition inside Iran.

He went on to compare the Guards as well as the Iranian Shiite fundamentalist leadership to “a combination in 1936 of Hitler’s brownshirts and blackshirts.”

Continued Woolsey: “There was a lot of opposition to Hitler. … The German people and the German army were not at that point the problem. It was his domination of the state using his thugs. And the thugs here for Ahmadinejad and Khomeini in different ways are the Revolutionary Guard.”

Woolsey made similar points in a piece last week at National Review Online authored with McFarlane. The two argued Obama should “let Iran’s corrupt and cruel elite contemplate that you are carrying not just a big stick, but one that could be wielded decisively.”

In the radio interview today, Woolsey stressed that Iran’s non-Guard related infrastructure, such the civilian electric grid, should be left intact.