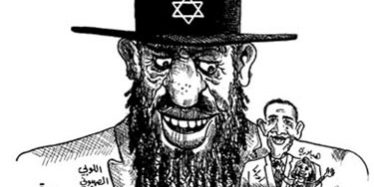 Anti-Semitism may not yet be a litmus test for social acceptability in the US, but it has certainly become acceptable.

Proof of this dismal state of affairs came this week with the publication of a supportive profile of University of Chicago professor John Mearsheimer in The Atlantic monthly written by the magazine’s in-house foreign policy guru Robert Kaplan.

Mearsheimer is the author, together with Harvard’s Kennedy School of Government’s Prof. Stephen Walt, of the infamous 2007 book The Israel Lobby and US Foreign Policy. Since the book’s publication, Mearsheimer has become one of the most high-profile anti-Semites in America.

Kaplan’s article was a clear bid to rehabilitate Mearsheimer in order to advance his pre-Israel Lobby theory of realism in international affairs.

This theory’s considerable intellectual underpinning rendered Mearsheimer one of the most prominent political scientists in America during the 1990s. As a realist himself, particularly in relation to the rise of China as a superpower, Kaplan perhaps believed that by rehabilitating Mearsheimer, he would advance his goal of convincing US policy-makers to adopt a realist approach to China.

But whatever his motivations for writing the profile, and whatever its eventual impact on US policy towards China, Kaplan’s profile of Mearsheimer served to mainstream a Jew-hater and in so doing, to give credibility to his bigotry.

It has become necessary to rehabilitate Mearsheimer because in the years since he and Walt published their conspiracy theory against Israel and its American supporters, Mearsheimer has actively embraced fringe elements in the US and the world in order to advance his campaign to discredit Israel and its supporters. As Alan Dershowitz highlighted in November, Mearsheimer wrote an enthusiastic endorsement of a psychotically anti-Semitic book written by British jazz musician and prolific anti-Semite Gilad Atzmon.

The book, titled The Wandering Who? is replete with Holocaust denial, claims that Jews control the world and America, characterizations of the Jewish God as evil and corrupt, and claims that Israel is worse than Nazi Germany.

In his endorsement, Mearsheimer called the book “fascinating,” and said it “should be read widely by Jews and non-Jews alike.”

As far as Kaplan was concerned, Mearsheimer’s embrace of Atzmon was a simple mistake. But it wasn’t. It was part of an apparent decision on Mearsheimer’s part to use his own celebrity to legitimize his anti-Semitic views.

In a speech to the Palestine Center in April 2010, for example, Mearsheimer distinguished between “righteous” Jews and “New Afrikaner” Jews. The former are Jews who oppose and attack Israel and the latter are Jews who support and defend Israel.

By sanitizing Mearsheimer’s bigotry in his sympathetic profile, Kaplan mainstreamed his hatred.

And Kaplan is not alone.

KAPLAN’S PROFILE of Mearsheimer is part of a larger trend in US letters, politics and culture in which anti-Semitism is becoming more and more acceptable. As Adam Kirsch noted in an article in the Tablet online magazine this week, The Israel Lobby’s central contention, that a cabal of disloyal Jews and sympathizers has forced the US to adopt a pro-Israel policy against its national interests, has found recent expression in the writings of mainstream journalists including New York Times’ columnist Tom Friedman and Time’s Joe Klein.

Last week, The Washington Post-owned online magazine Foreign Policy – which publishes a regular blog by Stephen Walt, published an article by Mark Perry claiming that in 2007 and 2008 Mossad agents posed as CIA agents in a false-flag operation whose aim was to build a cooperative relationship with the Pakistani/Iranian Baluchi anti-regime Jundallah terror group.

Perry’s report was based solely on anonymous sources. Its obvious purpose was to discredit the very notion of Israeli-US intelligence cooperation on Iran.

Following the publication of Perry’s article, Israel abandoned its general policy of never commenting on intelligence issues. The Foreign Ministry denounced his report as “utter nonsense.”

What Foreign Policy failed to tell its readers is that Perry is not an objective reporter. He is a former adviser to Yassir Arafat and an advocate of US engagement with Hamas and Hezbollah. By failing to mention his biases, Foreign Policy became an accessory to the mainstreaming of anti-Semitism. Like The Israel Lobby, Perry’s report in Foreign Policy adds to the legitimacy of the attitude that there is something fundamentally wrong with having close relationship with the Jewish state.

Perhaps if Mearsheimer and Walt had published their updated version of The Protocols of the Elders of Zion in 1997 instead of 2007 they would have been received in the same manner.

And within five years they would have been rehabilitated by the establishment. But in all likelihood, that wouldn’t have been the case.

It is a fact that since the turn of the century, and particularly in the wake of the collapse of the Israeli-Palestinian peace process in 2000 – a collapse precipitated by Arafat’s rejection of Palestinian statehood; and in the aftermath of the September 11 attacks on the US, anti-Semitism has become far more acceptable in the US and throughout the world. The volume of attacks against Jews has skyrocketed and the intellectual war against Israel and its Jewish supporters has grown ever more virulent.

The rise of anti-Semitism in the US has many causes, but three parallel developments stand out. First, the development of Arab satellite stations like Al Jazeera has brought the open Jew-hatred of the Arab world into the Western discourse.

True, most Westerners reject the Arab annihilationist form of anti-Semitic propaganda as crude and wrong. But the Jew-hatred propounded by these broadcasts has had a corrosive impact on the Western discourse. It has deadened observers to the lies at the heart of the propaganda.

That is, whereas they may reject the daily calls to destroy the Jews, Westerners have increasingly internalized the basic claim that Jews deserve to be hated. Take for instance a Washington Post story last week on Egypt’s decision to bar Jewish worshipers from making their annual visit to the grave of Torah sage Rabbi Yaakov Abuhatzeira.

The story claimed that the Egyptians oppose Israel because of its treatment of Palestinians and because the Egyptian cross-border terror attack on Israel last August “led to the killing of at least five Egyptian border guards as Israeli troops pursued alleged militants.”

That is, according to the Washington Post, just as the pan-Arab media claims, Israel is entirely responsible for Arab hatred of Jews.

THEN OF course there is the European media.

This week, the Dutch Christian newspaper Trouw published an article about prenatal care in Israel written by Ilse van Heusden. Van Heusden wrote of the superior medical care she received in Israel where she lived temporarily and where she gave birth to a healthy son.

Rather than extol the dedicated care she received, van Heusden attacked it. She claimed that Israel’s world class prenatal medicine is a product of its embrace of eugenics and its similarity to Nazi Germany. As she put it, “To be pregnant in Israel is comparable to a military operation. Countless ultrasounds and blood tests should produce the perfect baby, nothing can be left to the luck of the draw. The state demands healthy babies and a lot of them too.”

Trouw’s decision to publish van Heusden’s anti-Semitic assault is of a piece with countless articles published in the European media portraying Israelis as evil Jews intent on using science and every other means at their disposal to advance the Jews’ malign goals of global domination, genocide, apartheid, and general evil. When Israel dares to complain about these attacks, European politicians and media celebrities are quick to stand up and defend their right to freedom of expression.

So it was that Sweden’s Foreign Minister Carl Bildt – who barred all the Muhammad cartoons from being published in the Swedish media – stood by Sweden’s leading tabloid Aftonbladet when in 2009 it published an article accusing IDF soldiers of killing Palestinians in order to harvest their organs. In the mind of the anti-Semites, by trying to object to the blood libel, Israel was proving that it seeks to control the media.

The European media’s lies about Israel have been translated into official government policies of lying about Israel. So it is that the French National Assembly published a report last month about the geopolitics of water that included a 20-page diatribe claiming that Israel uses water as a weapon of apartheid against the Palestinians.

To write the report, the French legislators had to ignore not only the content of the Israeli-Palestinian agreement on water in the 1995 Interim Agreement. They had to ignore the basic fact that Israel gives the PA far more water than the agreement requires it to give, and to associate malign intent to the Israeli government. That is, they had to embrace the irrationality of anti-Semitism.

Parallel to the penetration of Arab anti-Semitism into the Western discourse through the pan- Arabic media, and the embrace of overt anti- Semitism by the European media and political class, over the past decade, we have witnessed the development of an alliance between the West’s political Left and Islamist movements.

The international Left’s embrace of the likes of Hamas, the Taliban, Iran and the Muslim Brotherhood has increased leftist and isolationist American policy-makers’ comfort level in adopting hostile postures towards Israel. So it is that at the same time that the Obama administration is assiduously courting the Taliban, the Muslim Brotherhood and the Iranian regime, according to Channel 2, US Secretary of State Hillary Clinton has refused to meet with Foreign Minister Avigdor Lieberman during his upcoming trip to Washington. Channel 2 reported that senior US officials said that “Lieberman is an obstacle to peace. We don’t want our pictures taken with him and with what he represents.”

Anti-Semitism is prejudice that is based on a rejection of reason. To fight it, it is not sufficient to disprove the contentions of the likes of Mearsheimer. He and his colleagues must be discredited and their enablers must be shamed.

But before this can happen, world Jewry and Israelis alike need to recognize what is happening.

And like its racist and religious predecessors, its aim is to deny the right of Jews to be free.

In the face of this onslaught the Jewish people in Israel and the Diaspora have two choices. We can either succumb to our enemies, or we can fight back.