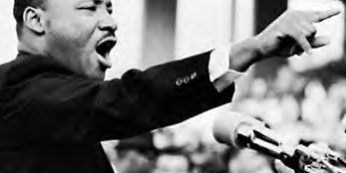 My sister is beside herself. She and her Israeli husband and kids had moved from Israel to northern California just over a year ago. Now her kids attend the same Jewish day school she and I had gone to when we grew up there nearly three decades ago.

“It’s Martin Luther King Jr. Day,” she sighs on the phone over the noisy children in the background. “The kids are off school today.”

I can feel the despair in her voice. Nothing against Dr. King, but a long weekend (the holiday is always observed on a Monday) in mid-January when schools were off, but her husband’s workplace wasn’t, was not something she had anticipated.

Martin Luther King, Jr. Day is a United States federal holiday marking the birthday of Rev. Dr. Martin Luther King, Jr. It is observed on the third Monday of January, which is today. The holiday was observed for the first time in the United States on January 20, 1986, the year I turned 14. As a young teenager, I remembered enjoying the fact that we got a brand new day off, but we honestly didn’t know what to do with ourselves. For the first three years, until I got a driver’s license, I recall a tradition of my friend and I riding our bikes to the local bowling alley and spending all day bowling ‘in honor’ of Dr. King.

Needless to say, MLK Day has become more poignant since Barack Obama became US President four years ago. In the 1960’s Martin Luther King Jr. could only ‘dream’ about an African-American becoming President of the United States, but now it is a reality, no matter whether one approves of him or not.

Interestingly enough, MLK Day is not the only holiday that has gotten more presidential attention since Obama took office. One could add Passover to that list. The Obamas have hosted a Passover Seder in the White House every year since 2008. Obama even uses the same type of Maxwell House Haggadah that I do. While some might dismiss the White House Seder as just a gimmick or a photo-opp, it obviously means a lot to the current President and First Lady. Why else would they make the effort to organize a Passover Seder if they didn’t feel connected to it? No previous US President ever made a Seder. It is obvious that as African-Americans the Obamas strongly feel the connection to the universality of the Passover’s themes of struggle and liberation, from slavery to freedom.

The struggle for liberation was also a theme of the Civil Rights Movement led by Martin Luther King Jr. in the 1960’s. Many Jews marched with King in the protests for civil rights. Some estimates say that of all whites who participated in King’s civil rights movement, between half and two-thirds were Jewish.

During his lifetime King witnessed the birth of Israel and the continuing struggle to build a nation. He consistently reiterated his stand on the Israel- Arab conflict, stating “Israel’s right to exist as a state in security is uncontestable.” It was no accident that King emphasized “security” in his statements on the Middle East.

On March 25, 1968, less than two weeks before his tragic assassination, he spoke out with clarity and directness stating, “…peace for Israel means security, and we must stand with all our might to protect its right to exist, its territorial integrity. I see Israel as one of the great outposts of democracy in the world, and a marvelous example of what can be done, how desert land can be transformed into an oasis of brotherhood and democracy. Peace for Israel means security and that security must be a reality.”

King also once delared, “I solemnly pledge to do my utmost to uphold the fair name of the Jews — because bigotry in any form is an affront to us all.”

During an appearance at Harvard University shortly before his death, a student stood up and asked King to address himself to the issue of Zionism. The question was clearly hostile. King responded, “When people criticize Zionists they mean Jews, you are talking anti-Semitism.”

Unfortunately, King’s ‘I Have a Dream’ speech would not require too much alteration if given today in many parts of the world, but it would also be a dream about bringing to an end anti-Zionism and anti-Semitism.