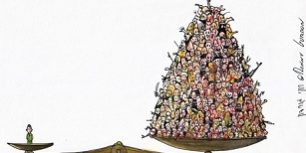 Some three months after being released from Hamas captivity, Gilad Schalit met separately with the ambassadors of Germany and France on Wednesday to thank them for their countries efforts in securing his release.

Schalit, surrounded by cameras, went to both countries embassies in Tel Aviv with his father Noam. He presented German ambassador Andreas Michaelis with a letter of thanks to give to German Chancellor Angela Merkel, and French ambassador Christophe Bigot with a similar letter for French President Nicolas Sarkozy.

Schalit said in front of the cameras that he was in the process of rehabilitation and physiotherapy, and returning to normal life.

Bigot, who visited Schalit at his home in Mitzpe Hila the night after his release, said he looked “much more fit than the first time, not only physically, but also emotionally.”

As he was getting into a car, Schalit ignored a reporter’s question about what he thought of his father’s decision to go into politics. Noam Schalit announced on Tuesday his decision to run for the next Knesset as a Labor party candidate.