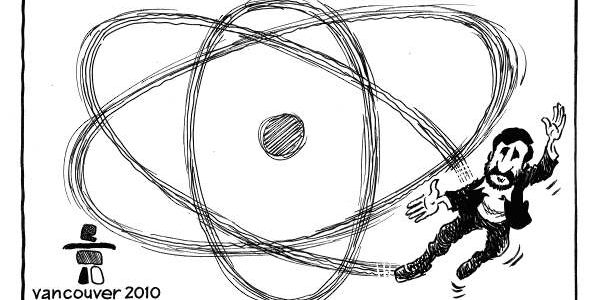 The official Iranian news agency Fars is calling it a “terrorist attack” and are accusing Israel and the US of carrying out the assassination of an Iranian nuke scientist.

The scientist was identified as Mostafa Ahmadi Roshan, a supervisor at the main enrichment facility at Nantanz. And the method was, if not sophisticated, certainly well thought out and executed.

At a time of growing tension over its nuclear program and mounting belligerence toward the West, Iran reported on Wednesday that an Iranian nuclear scientist died in what was termed a “terrorist bomb blast” in northern Tehran when an unidentified motorcyclist attached a magnetic explosive device to his car.

It was the fourth such attack reported in two years and, as after the previous incidents, Iranian officials indicated that they believed the United States and Israel were responsible. News photographs from the scene in northern Tehran showed a car draped in a pale blue tarp being lifted onto a truck. A driver who acted as a bodyguard was also killed, news reports said.

Photographs published by the IRNA news agency showed what it said was the body of the scientist still inside the car. The head covered with a white cloth.

The scientist was identified as Mostafa Ahmadi Roshan, 32, a professor at Tehran’s technical university, and a department supervisor at the Natanz uranium enrichment facility – one of two known sites where Western leaders suspect Iranian scientists are advancing toward the creation of a nuclear weapon.

It is not beyond the realm of the impossible that this assassination is the result of an internal dispute between factions – or even a domestic group that is opposed to Iran building a nuke.

Four killings in two years and really, not one of them key individuals in Iran’s nuke program. It would seem that if Israel and/or the US is responsible, the goal is not to degrade Iranian techincal ability but rather intimidation of scientists. The dead supervisor was traveling with a bodyguard – significant in and of itself.

It must be unnerving to be a scientist working on the Iranian bomb at this point.

We have heard of “mysterious” explosions in Iran. One such explosion recently killed Brigadier General Hassan Moqaddam along with sixteen others. Such activities could be why Iran continues to threaten closure of the Strait of Hormuz.

The Strait of Hormuz should not be the greatest concern for Iran. Domestically, they are seeing more and more of their own nuclear professionals killed. While these unique targeted killings may or may not be linked to any foreign state, Iran has proven to have a grave weakness in domestic security.

As GOP candidate Rick Santorum had stated time and again, the United States missed a great opportunity to change Iran back in 2009. During the 2009 Iranian elections, a mass pro-democracy movement later to be known as the Green Movement fought tirelessly to overthrow the Ahmadinejad regime. They cried out for help, yet the Obama administration turned their backs.

During a time when joint military strategic maneuvers are about to commence for the world’s largest military exercise consisting of U.S. and Israeli forces, we are preparing for war. Yet a war against Iran can be prevented. This has been proven over the last couple of years.

The proof is in the pudding. Iranians risked their own lives to turn the Shiite state into a pro-democratic one back in 2009. Many were killed, and more were imprisoned. Numerous Iranian elites have been assassinated recently, which demonstrates internal security vulnerabilities. What this mean is that with pro-democratic Iranians willing to engage in an internal uprising supported by a handful of foreign states, enough espionage, sabotage, and chaos might turn the tables in Iran.

The United States does not need to engage in another war, but we do need to suppress Iran. Identifying Iran’s weaknesses and capitalizing on those weaknesses will prevent a huge U.S.-led military action. As General George S. Patton once said, “No b*stard ever won a war by dying for his country. He won it by making the other poor dumb b*stard die for his country.”