Israel, Palestinian envoys to hold talks in Jordan on Tuesday 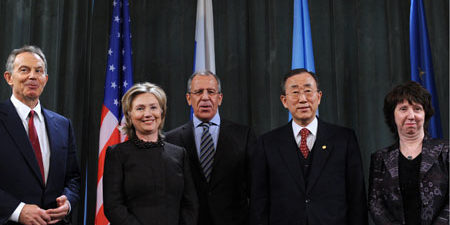 The meeting will be hosted by Jordanian Foreign Minister Nasser Judeh.

Judeh and representatives of the Middle East Quartet – the United States, European Union, Russia and the United Nations – will participate in the first part of the meeting. Only Judeh, Molcho and Erekat will take part in the second part of the meeting. The meeting is taking place ahead of a January 26 Quartet deadline for the resumption of direct negotiations.

In the West Bank city of Ramallah, a senior Palestinian official, Azzam al-Ahmed, said the  the sides were expected to present their positions on security matters and future borders between Israel and a future Palestinian state.

“This is not a negotiating session. The only intention is that both sides present their positions and we hope the Israeli answers will be positive, including stopping settlement activities and agreeing on the 1967 borders as the basis for a two-state solution,” he said.

Peace talks have been mostly stalemated in recent years. The most recent talks took place in September 2010. Those talks quickly broke down after Israel’s freeze on West Bank settlement construction expired.