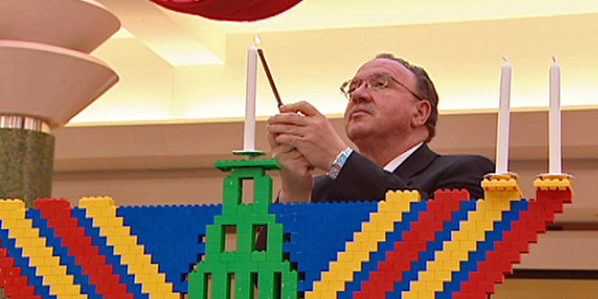 Jewish youth in Windsor, Ont., have built a nearly 2.5 metre high menorah out of Lego to celebrate Hanukkah and will present it to sick children at a local hospital.

Rabbi Sholom Galperin, director of the Student Jewish Centre of Windsor, thought up the idea.

The structure consists of more than 3,000 pieces of Lego and took three hours to build. It was briefly displayed at Windsor’s Devonshire Mall, the city’s biggest shopping centre.

The menorah will be moved to the pediatrics unit of Windsor Regional Hospital on Thursday.

Galperin said the menorah was built to “give back and light up the kids’ lives.”

“It’s something that’s unique and something that will bring light to everyone,” Galperin added. “It’s just been a phenomenal response for everyone. I had a lot of fun doing it.”

The menorah will stay lit and on display at the hospital throughout Hanukkah. It will then be taken apart, with the Lego donated to the pediatrics unit.