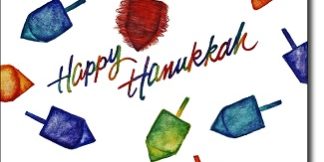 Growing up as a young boy on the south side of Chicago, I loved sports and Hebrew school. I hesitate to call my self a Hebrew school junkie, but I loved going there. Learning Hebrew was a new world for me that I loved exploring, and studying the fascinating stories of the Torah gave my imagination new horizons and vistas. I loved celebrating the Jewish holidays, and I freely admit that as a member of a rather materialistic culture, I adored Hannukah because of the 8 gifts that I received!

The story of Hannukah that I learned in Hebrew school talked about the miracle of the small cruze of oil lasting 8 days, instead of one. I gladly accepted that mircle as the gospel truth and could imagine no other explanation. But reading the books of the Maccabees, preserved by the ancient church, I am exposed to a different explanation for Channukah, the Maccabees and the 8 days of celebration.

In a concise and perceptive article written by Rabbi Manuel Gold, he brings sources from the first and second Book of the Maccabees that make no mention whatsoever of the oil and the miracle. The first source is from the first Book of Maccabees, compiled after 120 BC, and written in Hebrew.

They also made new sacred vessels, and they brought the lamp stand … into the Temple. They burned incense on the altar and lit the lights on the lamp stand, and the Temple was filled with light…. For eight days they celebrated the dedication of the altar. … Then Judah, his brothers and the entire community of Israel decreed that the days of rededication of the altar should be celebrated with a festival of joy and gladness at this same time every year beginning on the 25th of the month of Kislev and lasting for eight days. (First Maccabees 4:49-59)

This section does not mention the little jar of oil, probably because the author never knew about it. The first mention of the jar of oil comes six hundred years later, in the tractate Shabbat 21a, found in the Babylonian Talmud.

But as Rabbi Gold points out, “this source leaves us with some unanswered questions: Why did they celebrate for eight days? Why did the celebration become a permanent festival (Hanukkah)? Where did the “jar of oil” story originate? What was the miracle of Hanukkah for our ancestors? What is the miracle for us?”

Let’s take a look at another source, from Second Maccabees:

Judah the Maccabee and his men, under the Lord’s leadership, recaptured the Temple and the city of Jerusalem. … After purifying the Temple, they made another altar. Then by striking flint they made a new fire and … offered sacrifices and incense … lit the lamps. … On the anniversary of the very same day on which the Temple had been defiled, the 25th of Kislev, they now purified the Temple. They celebrated joyfully for eight days, just as on Sukkot, knowing that (a few months before) on Sukkot they had (been unable to celebrate at the Temple) and had spent the festival (hiding) like wild animals in the mountains and caves. That is why they came carrying stalks wreathed with branches-palm fronds-and ripe fruit (the lulav and etrog), and sang hymns of praise (Hallel) to Him Who had given them the victory that had brought about the purification of His Temple. By a vote of the community they decreed that the whole Jewish nation should celebrate these festival days every year. (Second Maccabees 10:1-8)

Note how this source also makes no mention about a miraculous jar of oil. Instead, Channukah is a way for Jews to celebrate Sukkot, an eight day holiday that was not celebrated in the early fall for three years. That was because the pagans overran the temple, defiled it and made it impossible for Jews to make their pilgrimage when the temple.

These two sources teach me a great deal about the importance of centralized worship and the temple for Jews. Sukkot was a spectacular holiday especially in Jerusalem. Events took place at the temple with the lulav and etrog (palm fronds and various branches and a citryn), the city of Jerusalem was lit up with torches and there was a spectacular ceremony known as Simchat Beit haShoevah, the celebration of the drawing of the water. Not being able to celebrate this holiday for a number of years was a huge loss for the Jewish people.

During the time the temple stood and until today, Jews believe that the fall holiday of Sukkot is a pilgrimage festival during which the world is judged for the amount of rain that will fall in the coming year. Ancient Israel was an agricultural society, hence the importance placed on this holiday. In fact, although there were many holidays on the Jewish calendar, the rabbis called Sukkot heChag, THE holiday.

The light of the Hannukah candles provide us with much needed light in our lives, and are a way to publicize the miracle of the cruze of oil mentioned in the Talmud. They are a constant reminder of the power of God in our lives. While I don’t mean to diminish this important religious theme, I believe it is important to incorporate a deeper and more historical understanding of the holiday as provided by the books of the Maccabees. The miracle of Hannukah, as we learn about in the 1st and 2nd Maccabees, is also about the triumph over foreign invaders who defiled the center of our religious life and prevented us from celebrating there. It is about once again looking to Jerusalem as the center of our religious journies, both spiritually and physically. Being able to celebrate Hannukah in the 64th year of the establishment of the 3rd Jewish commonwealth, is for me, a great privilege.