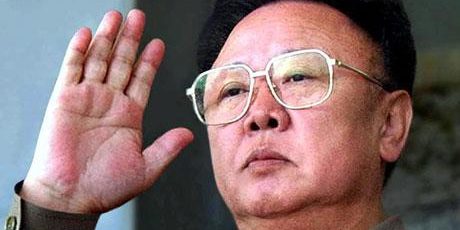 The sudden death of Kim Jong II, of a heart attack aged 69, Monday, Dec. 19 – even though his youngest son Kim Jong-un was hailed as successor – confronts the world for the first time since the Cold War with a leaderless nuclear power about which it knows almost nothing. Though anointed as heir, his youngest son Kim Jong-un, believed to be 26, is more than likely to be challenged for his claim to power. At present, therefore, no one knows who controls North Korea’s nuclear arsenal – any more than the identity of the country’s next ruler after the dust settles.

Meanwhile there are pressing questions: Will Kim Jong II’s successor follow through on his consent this week to suspend Pyongyang’s enriched-uranium nuclear weapons program for 240,000 tonnes food aid from Washington? How will the 1.2 million strong standing army of the North respond to the first actions of South Korea, Japan and US forces in the Far East in placing their armies on alert?
There has been no sign of motion from this huge army apart from test-firing a short-range missile Monday morning from the east coast.

This is almost certainly the calm before the storm. A year ago, Kim Jong Il began grooming his son for the leadership, the third of their dynasty, by appointing him Vice Chairman of the Central Military Commission of the Workers Party of Korea and conferring on him the rank of four-star general.

Still, he is as shorter on military experience than he is in politics. After the dead leader’s funeral on Dec. 28, the army, or parts therefore, will have to decide whether to continue supporting the Kim family’s rule in Pyongyang after 60 years or replace it with a different kind of leadership.

The prospect of uncertainty and change there sends shudders down many political spines in Washington, Tokyo and Seoul, as well as in Beijing and Moscow. In recent months, world powers were deeply immersed in the war threats hanging over the Middle East, Syrian bloodshed and Iran’s nuclear weapons momentum. Monday, they woke up to a completely unforeseen scenario, an unstable Far East state armed with a nuclear bomb which could take the region in any of five directions:

1. Elements of the North Korean army or its security services could go head to head for a power grab in Pyongyang, potentially sparking civil strife in this enigmatic nation of 24 million.

2.  To keep any such violence from spilling across its borders, China may send troops into North Korea bringing similar action from Seoul, possibly with US backing.. China has a large North Korean expatriate minority which respects Pyongyang rather than Beijing and is therefore a source of unrest.

Of the US troops stationed for 58 years on the armistice lines between South and North, about 28,500 remain and could be involved in a conflict with the potential of exploding into another Korean War. The first war in the 1950s cost several armies more than a million lives.

3.  The big difference between then and now is that today North Korea has nuclear arms and there is no knowing at what point someone in Pyongyang may decide to use them.

4.  A recent Pentagon situation paper estimates that if the Korean Peninsula descended into domestic anarchy and civil strife, the United States would be called on to raise an army of intervention numbering 400,000 soldiers, 100,000 more than the size of US forces fighting in Iraq and Afghanistan at the peak of those conflicts.

Western and Israel intelligence services have never been sure how deeply China is involved in North Korea’s nuclear and military assistance to Iran and Syria.  Is it just passive? or does Beijing use Pyongyang as a channel for pumping nuclear technology to Tehran and Damascus?

Some Western agencies have recently come to believe that China has a bigger stake in those Middle East countries than realized and much of the military technology transferred by North Korea to Iran is actually of Chinese origin.
A power struggle in Pyongyang, which could be drawn out for as long as a couple of years, could go in many unpredictable directions including stepped-up contribution to the Middle East nuclear race.

Israel: An Environmental Wonder Making Its Deserts Like Eden
March 22, 2021