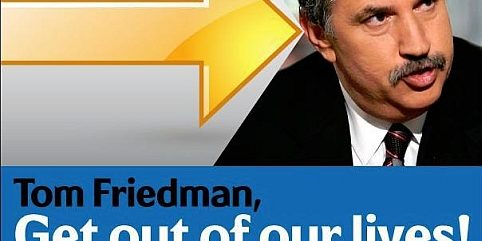 “Uncle” Tom Friedman has done it again in the New York Times; he has proven that you can be a useful idiot and a Jewish anti-Semite all in one.

Evidently, the means justify the ends, Friedman, who has always used his Jewish identity to infer that he is “one of us”, has crossed the red lines and joined the ranks of Israel’s enemies. In his latest editorial column, he has stated that only by undermining the special relationship between Israel and the United States can the Jewish lobby be denied their control of Congress – which institution has been, and I quote, “bought and paid for by the Israeli lobby.”

Friedman doesn’t stop there, he makes sure to suggest that the leading Republican candidates are in the pockets of the Jewish lobby and therefore forced “to grovel for Jewish votes — by outloving Israel”.

Surprisingly, he has yet to suggest that Obama’s failures as a President are not a result of his incompetence, but a result of the Jewish lobby’s control of the American public, the media, and Wall Street. My apologies if I left someone out.

The vast majority of Jews, we who are located somewhere in the middle of the vast political spectrum, are used to hearing and reading this kind of anti-Semitic rambling from Holocaust deniers such as Mahmoud Abbas, the unelected leader of the Palestinian Authority or from Nasrallah, the unelected leader of Hizbullah.  “Uncle” Tom Friedman has evidently turned in his membership card to the Jewish race and become a post-modern, post-Zionist, moral relativist hater of the State of Israel.

He can not contain his revulsion for Israel and her elected Prime Minister Benjamin Netanyahu. Again I quote: “Benjamin Netanyahu understands that the standing ovation he got in Congress this year was not for his politics. That ovation was bought and paid for by the Israel lobby.”

It does not cross Friedman’s mind that the overwhelming majority of Americans, and this has been proven by hundreds of surveys over the years,  Jews and non-Jews, identify with Israel as a strategic ally and friend of America. Congress has consistently voted to support the security of the State of Israel since Israel’s establishment because of the belief that by helping Israel remain strong, Congress is supporting vital United States interests in the Middle East.

Friedman would also never admit, that Israel’s across-the-board support from Congress is a rejection of President Obama’s Middle East policies of endorsing the Palestinian Arab narrative. Those have damaged United States allies in the Arab world, endangered the free flow of oil to the West and given Iran the time to expand her nuclear arsenal.

But why now ? What prompted Tom Friedman’s frontal attack on Israel and her supporters in America?

This past week the Palestinian narrative, a false and fictional depiction of historical truth, took a severe blow. Newt Gingrich, a leading Republican candidate for President, spoke in public and for all to hear about the Palestinians being an “invented people”.

Evidently, what ticked off Friedman is his fear that by speaking the truth about the history of the conflict here in the Middle East, Newt Gingrich has exposed the link between the creation of the Palestinian Arab identity and the denial of the historical truth underlying Zionism and the establishment of the State of Israel.

This is what Newt Gingrich meant when he stated that the Palestinian Arabs are an “invented people”, and that they have been created to be the basis for the destruction of the state of Israel. Contrary to what Tom Friedman has been saying, writing and believing about the Palestinian Arabs, their whole  reason for existing is to deny Israel her right to exist.

Anti-Semites can never acknowledge or accept this truth, by doing so their whole house of cards comes crashing down. Friedman has built his entire career on propagating the Palestinian lie. By admitting that Gingrich is right, he would be admitting that he has lied to his readership and should not be seen as a credible interpreter of historical events.

But it doesn’t stop there.

Let us not forget that Friedman is President Obama’s personal emissary to the printed media. Obama’s re-election campaign has reached a critical juncture as the Republican Party has winded down to two leading candidates. Both have a more than good chance of defeating Obama this coming November. For the first time it is possible to realistically compare Obama to a Republican alternative, and this frightens the hell out of Friedman and American liberals in general.

For the first time they seem to be internalizing the possibility that the American public no longer accepts the “invented narrative” of President Obama being a popular and successful President. The American public is seriously questioning the validity of what it has been taught to believe during this presidency,  the claim that today Americans are better off than they were four years ago.

The American public has woken up to the possibility that Tom Friedman and others like him have been conveying contemporary events untruthfully, inventing a narrative that supports the re-election of an inept and incompetent President, rather than letting a Republican get the job done.

And that will be the Jews’ fault as well. Anti-Semites always blame the Jews, so why should Friedman be any different.