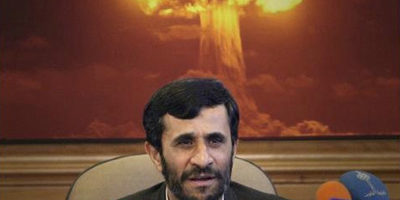 Iran is a national security problem that never seems to go away and pops up everywhere you look.

The Iranians say they’ve captured a secret American spy drone. The Iranians are meddling in Iraq. The Russians are mad about the European missile defense system — which the U.S. and its allies want to put up because of Iran. And then there’s the big one: Iran could be on the cusp of building a nuclear weapon.

The U.S. and its allies do not have many good options for dealing with Iran, according to a report out Tuesday from the conservative American Enterprise Institute. Its authors assume Iran will have a nuclear weapon by Inauguration Day 2013, no matter who is taking office, and conclude the world could be forced into a “containment”  and “deterrence” strategy, whether it likes it or not.

Just because containment and deterrence may be the “least-bad” choices, however, doesn’t mean they’re low-risk or low cost, the AEI authors write. Doing it right would mean a serious, long-term commitment by the U.S. and its allies and — ah yes, here’s the other shoe dropping — you can’t do that with austerity defense budgets.

The deterrent value of US conventional supremacy is also being undercut by continuous and well-publicized reductions in defense spending,which has been marked, in recent years, by a growing number of terminations and cancellations of the very weapons most likely to provide a proximate danger in Tehran’s eyes. New Joint Chiefs of Staff chairman General Martin Dempsey also testified at his confirmation hearing that the defense budget cuts proposed in a number of deficit-reduction plans “would be extraordinarily difficult” to implement and impose “very high risk” on future US forces in combat.

Indeed, US forces are already on a path to a new kind of hollowness, facing crippling readiness shortfalls of long-term power projection, particularly in training for high-intensity, large-scale campaigns against a high-technology adversary. That is, the ability to deter Iran with conventional forces will be further weakened.

This is bad, AEI says, because it believes the U.S. must keep up a constant, robust conventional deterrence in the Middle East that Iranian leaders must view as a real threat. In the nightmarish region of tomorrow, Iran will easily be able to keep American forces at bay, the report warns: “The laborious and lengthy standing-start deployment of Operation Desert Shield will be all but impossible to conduct under the threat from a nuclear Iran.”

(If you’re keeping score at home, AEI’s report was one of two conservative white-papers rolled out this week to take up the crusade against big defense budget reductions; the other, which attacked sequestration directly, came from the Heritage Foundation.)

Back to Iran — what about all the American presidents, secretaries of state and their international allies who have repeated that it would be “unacceptable” for Tehran to have a nuclear weapon? AEI’s report shrugs:

At this moment it seems nearly certain that the international community, including the United States, will accept it. Anything is possible, but it is very difficult to imagine the current American administration going to war with Iran to prevent Tehran from advancing its nuclear program, whatever reports come out of the International Atomic Energy Agency (IAEA) or elsewhere. None of America’s allies, apart from Israel, will take military action.

There is no reason to imagine that a sanctions regime, or attempts to “isolate” Iran diplomatically, will succeed in the next year or two, having already failed spectacularly for more than a decade. And with the US failure to secure a binding relationship with Iraq, it is much more likely that the sanctions regime will steadily erode as Tehran uses Iraq to bypass it.

So that means continued tension with Russia over the Euro-missile shield; a possible arms race in the Middle East; and living with the threat that Iran could slip nuclear weapons to terrorists. Or it could mean World War III when Israel attacks Iran’s nuclear sites, with or without American support, and the region that Washington hoped would cool down after the Iraq withdrawal instead catches fire. Iran mines the Strait of Hormuz; global energy prices spike; and international creditors (cough China cough) are suddenly unwilling to lend Washington money it needs to cover the resultant major military operations.

Then again, it’s also possible the world could keep up the game it has been playing with Iran for years or decades more. Its centrifuge equipment mysteriously destroys itself. Key industrial components arrive defective or break after light use. Strange explosions or accidents befall its weapons program and the expert scientists who run it. If the West can keep Tehran one step short of the finish line for as long as possible, it could at least have more time to prepare for all the nightmare scenarios.