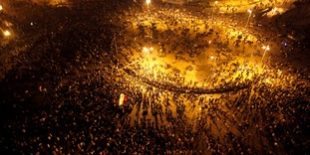 Police backed by the army used batons and teargas on Sunday to charge protesters in Cairo’s Tahrir Square demanding Egypt’s ruling generals swiftly hand power to civilians, in some of the worst violence since the overthrow of Hosni Mubarak. Medical sources said as many as 11 died in Sunday’s violence.

With little more than a week to go before a parliamentary election that starts the process of transition, the state news agency reported three dead in a second day of violence on Sunday and 192 wounded. It took the official death toll to five in two days.

“The people want the toppling of the regime,” thousands of protesters chanted before and after the charge by police backed by military officers who had stayed on the sidelines till then.

The demonstrators accuse the army of seeking to retain power from behind scenes as it oversees the transition, which could see the military remain in control until presidential elections which may not happen until late 2012 or early 2013.

Generals deny any such intention and the cabinet reiterated on Sunday that violence would not delay the staggered parliamentary election, voting for which starts on Nov. 28.

The security forces, who moved in as darkness fell, beat some protesters with batons. One group of demonstrators formed a line and bowed in the traditional Muslim prayer, television images showed. Most held their line as the police moved in.

“The army sent soldiers to Tahrir to help state security disperse the protesters. They are beating us hard,” said Ragab Shemiekhy, who has been in Tahrir throughout the latest protest.

A Reuters witness saw the dead body of a 28-year-old man on Sunday evening in a makeshift clinic on the edge of Tahrir Square. It was not clear how he had died or if the death was one of those reported by medical sources.

Demonstrators held up spent shotgun cartridges, bullet casings and empty teargas canisters. Activists carried one protester’s corpse wrapped in a blanket around Tahrir. “We will sacrifice our blood and souls for you, martyr,” they chanted.

Army police detained dozens of people, a witness said. After initially fleeing, protesters poured back into the square.

“The military council are shutting their ears, they’re ignoring us, they don’t give a damn about us, and we’re going to stay occupying the streets and demanding our rights. Eventually justice will prevail,” said Amal El Mohandes, 31.

Egypt’s benchmark index tumbled about 2.5 percent on Sunday as investors worried about the outcome of the clashes.

The protest that began on Friday was led by Islamists. But it has since been largely driven by many of the same youthful activists who led the uprising against Mubarak’s 30-year rule, putting national pride over religion. Some Islamists, including the Muslim Brotherhood, withdrew from the protest.

“Those in the square to do not belong to any party. This is a new scene,” Ahmed Abo Barka of the Brotherhood’s Freedom and Justice Party told Al Jazeera. “They want to block the route before the Egyptian people who want their election.”

The Brotherhood, banned under Mubarak, had tended to take a softer line towards the military than some other groups, which analysts say is to ensure elections go ahead and prevent any return to the kind of repression it suffered in the past.

While distancing itself from protests on Saturday and Sunday, the Brotherhood said the army must still apologize.

A row has erupted between political groups and the army-picked cabinet over ground rules for drafting the constitution that could leave the military free of civilian control. Parliament is to pick the assembly to draw up the constitution.

Many Egyptians are angry that nine months after ousting Mubarak, the army remains in charge and police are still using the same heavy-handed tactics against demonstrators.

“We are on the brink of danger. Those asking for the government to fall are asking for the state to fall,” Egyptian army General Mohsen Fangary had told a television channel.

The army and its cabinet said the vote would not be delayed.