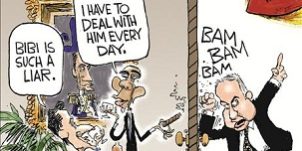 The slurs against Prime Minister Binyamin Netanyahu voiced by French President Nicolas Sarkozy and US President Barack Obama after last week’s G20 summit were revealing as well as repugnant.

Thinking no one other than Obama could hear him, Sarkozy attacked Netanyahu, saying, “I can’t stand to see him anymore, he’s a liar.”

Obama responded by whining, “You’re fed up with him, but me, I have to deal with him every day.”

To understand why this is the case it is necessary to first ask, when has Netanyahu ever lied to Sarkozy and Obama? This week the UN International Atomic Energy Agency’s report about Iran’s nuclear weapons program made clear that Israel – Netanyahu included – has been telling the truth about Iran and its nuclear ambitions all along. In contrast, world leaders have been lying and burying their heads in the sand.

Since Iran’s nuclear weapons program was first revealed to the public in 2004, Israel has provided in-depth intelligence information proving Iran’s malign intentions to the likes of Sarkozy, Obama and the UN. And for seven years, the US government – Obama included – has claimed that it lacked definitive proof of Iran’s intentions.

Obama wasted the first two years of his administration attempting to charm the Iranians out of their nuclear weapons program. He stubbornly ignored the piles of evidence presented to him by Israel that Iran was not interested in cutting a deal.

Israel, including Netanyahu, was telling the truth.

So if Netanyahu never lied about Iran, what might these two major world leaders think he lies about? Why don’t they want to speak with him anymore? Could it be they don’t like the way he is managing their beloved “peace process” with the Palestinians? The fact is that the only times Netanyahu has spoken less than truthfully about the Palestinians were those instances when he sought to appease the likes of Obama and Sarkozy. Only when Netanyahu embraced the false claims of the likes of Obama and Sarkozy that it is possible to reach a peace deal with the Palestinians based on the establishment of an independent Palestinian state west of the Jordan River could it be said that he made false statements.

Because the truth is that Israel never had a chance of achieving peace with the Palestinians.

And the reason this has always been the case has nothing to do with Netanyahu or Israel.

THERE WAS never any chance for peace because the Palestinians have no interest in making peace with Israel. As the West’s favorite Palestinian “moderate,” Fatah leader and Palestinian Authority chairman Mahmoud Abbas said in an interview with Egypt’s Dream TV on October 23, “I’ve said it before and I’ll say it again. I will never recognize the ‘Jewishness’ of the State or a ‘Jewish state.’” That is, Abbas will never make peace with Israel.

Acknowledging this, on Tuesday Netanyahu reportedly told his colleagues that through their recent actions, the Palestinians have abrogated the foundations of the peace process. As he put it, “By boycotting negotiations and by going instead to the United Nations , they have reneged on a central tenet of Oslo.”

That tenet, which formed the basis of the Oslo peace process, was “land for peace.”

As Netanyahu explained, Israel gave up land within the framework of the Oslo Accords. In exchange the Palestinians committed to resolve their conflict with Israel through direct negotiations that would lead to peace. Their UN gambit, like Abbas’s statement to Egyptian television, shows that the Palestinians – not Israel – have been lying all along. They pocketed Israel’s territorial concessions and refused to make peace.

So why do the likes of Sarkozy and Obama hate Netanyahu? Why is he “a liar?” Why don’t they pour out their venom on Abbas, who really does lie to them on a regular basis? The answer is because they prefer to blame Israel rather than acknowledge that their positive assessments of the Palestinians are nothing more than fantasy.

And they are not alone. The Western preference for fantasy over reality was given explicit expression by former US president Bill Clinton in September.

In an ugly diatribe against Netanyahu at his Clinton Global Initiative Conference, Clinton insisted that the PA under Abbas was “pro-peace” and that the only real obstacle to a deal was Netanyahu. Ironically, at the same time Clinton was attacking Israel’s leader for killing the peace process, Abbas was at the UN asking the Security Council to accept as a full member an independent Palestine in a de facto state of war with Israel.

So, too, while Clinton was blaming him for the failure of the peace process, Netanyahu was at the UN using his speech to the General Assembly to issue yet another plea to Abbas to renew peace talks with Israel.

Clinton didn’t exhaust his ammunition on Netanyahu. He saved plenty for the Israeli people as well. Ignoring the inconvenient fact that the Palestinians freely elected Hamas to lead them, Clinton provided his audience with a bigoted taxonomy of the Israeli public through which he differentiated the good, “pro-peace Israelis,” from the bad, “anti-peace,” Israelis.

As he put it, “The most pro-peace Israelis are the Arabs; second the Sabras, the Jewish Israelis that were born there; third, the Ashkenazis of longstanding, the European Jews who came there around the time of Israel’s founding.”

As for the bad Israelis, in the view of the former president, “The most anti-peace are the ultra-religious who believe they’re supposed to keep Judea and Samaria, and the settler groups, and what you might call the territorialists, the people who just showed up lately and they’re not encumbered by the historical record.”

BY RANKING the worthiness of Israel’s citizens in accordance with whether or not they agree with Clinton and his friends, Clinton was acting in line with what has emerged as standard operating practice of Israel’s “friends” in places such as Europe and the US. Like Clinton, they too think it is their right to pick and choose which Israelis are acceptable and which are unworthy.

On Wednesday we saw this practice put into play by British Ambassador Matthew Gould. This week the Knesset began deliberations on a bill that would prohibit foreign governments and international agencies from contributing more than NIS 20,000 to Israeli nongovernmental organizations. The bill was introduced by Likud MK Ofir Okunis with Netanyahu’s support.

According to Haaretz, Gould issued a thinly veiled threat to Okunis related to the bill. Gould reportedly said that if the bill is passed, it would reflect badly on Israel in the international community.

The document showed that in 2010, outside of Iraq, the British government gave a total of £100,000 to pro-democracy NGOs throughout the Arab world.

All seek to use international pressure on Israel to force the government to adopt policies rejected by the vast majority of the public.

So for every pound Britain forked out to cultivate democracy in 20 Arab non-democracies, it spent £6 to undermine democracy in Israel – the region’s only democracy.

And the British couldn’t be more pleased with the return on their investment. Speaking to Parliament last year, Britain’s Minister of Middle East Affairs Alistair Burt said the money has successfully changed Israeli policies. As he put it, “Since we began supporting these programs some significant changes have been made in the Israeli justice system, both civilian and military, and in the decisions they make. They have also raised a significant debate about these matters and we believe these activities will strengthen democracy in Israel.”

In other words, as far as Britain is concerned, “strengthening democracy” in Israel means tipping the scales in favor of marginal groups with no noticeable domestic constituency.

These shockingly hostile statements echo one made by then-presidential candidate Obama from the campaign trail in February 2008. At the time Obama said, “I think there is a strain within the pro-Israel community that says unless you adopt a unwavering pro-Likud approach to Israel that you’re anti-Israel, and that can’t be the measure of our friendship with Israel.”

Scarcely a day goes by when some foreign leader, commentator or activist doesn’t say that being pro-Israel doesn’t mean being pro-Israeli government. And like Obama’s campaign-trail statement, Clinton’s diatribe, Sarkozy and Obama’s vile gossip about Netanyahu and Britain’s self-congratulatory declarations and veiled threats, those who make a distinction between the Israeli people and the Israeli government ignore two important facts.

And this makes you anti-Israel.

The second fact these statements ignore is that Israel is the US’s and Europe’s stalwart ally. If Sarkozy and Obama had said what they said about Netanyahu in a conversation about German Chancellor Angela Merkel, or if Netanyahu had made similar statements about Obama or Sarkozy, the revelation of the statements would have sparked international outcries of indignation and been roundly condemned from all quarters.

And this brings us to the other troubling aspect of Sarkozy and Obama’s nasty exchange about Netanyahu. Their views reflect a wider anti-Israel climate.

Outside the Jewish world, Sarkozy’s and Obama’s hateful, false statements about their ally provoked no outrage. Indeed, it took the media three days to even report their conversation. This indicates that Obama and Sarkozy aren’t alone in holding Israel to a double standard. They aren’t the only ones blaming Israel for the Palestinians’ bad behavior.

And that is the real message of the Obama- Sarkozy exchange last week. Through it we learn that blaming the Jews and the Jewish state for their enemies’ behavior is what passes for polite conversation among Western elites today.