Did you hear what Obama told Sarkozy? 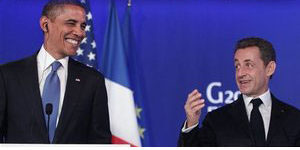 Obama retorted in response: “You’re fed up? But I have to deal with it all day.”

This is Obama’s “reset” foreign policy. Appease America’s enemies in the Middle East while sticking it to America’s sole ally in the region.

Obama has done a very poor job of hiding his disdain for the State of Israel and her Prime Minister, who are on the frontline of the war against the fascist enemies of the West. The antagonism our President feels toward Israel is self-evident and disgraceful. From his call for Israel to reward aggression and retreat to the “67 lines” which would make its borders indefensible to the contempt he has shown for Netanyahu to his attack on Jewish homes in Jerusalem and his embrace of anti-Semitic leaders like Turkey’s Erdogan, Obama has shown that he is unfit to be the leader of the free world, and a danger not only to Israel’s survival but to our own.