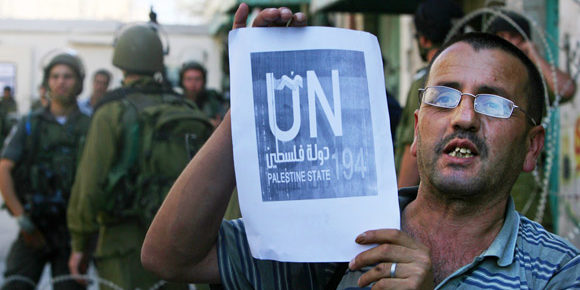 The “international community” is always quick to blame Israel for any reprisals it takes against Palestinian terrorists. Accusations of “collective punishment,” “disproportionate force,” and “extrajudicial targeted assassinations” are regularly hurled at Israel from the chambers of the dysfunctional Human Rights Council and other United Nations bodies, including the UN Security Council.

Yet when Israel seeks even the mildest of rebukes from the Security Council for continued rocket attacks launched against Israeli civilians from Hamas-controlled Gaza, it is met with stone-faced silence.

Israeli UN Ambassador Ron Prosor has just sent yet another letter dated October 29, 2011 to the Security Council calling “attention to a very serious escalation of rocket fire from the Gaza Strip.” On that very day, wrote Ambassador Prosor, major cities throughout southern Israel were bombarded with a barrage of dozens of rockets and mortars launched from the Gaza Strip. These attacks killed one Israeli civilian and injured a number of others. In Ashkelon, a man sitting in his home was murdered when a rocket exploded on top of him. Numerous rockets rained into the Israeli port city of Ashdod, injuring one man and causing significant damage to homes. In Gan Yavne, a suburb of Ashdod, one man was injured as rockets and mortars struck homes and civilian vehicles, setting fires in the streets.

“The scenes coming out of Southern Israel today should shock and appall the international community and all decent people,” wrote the Israeli ambassador. “There is no question that the terrorists who carried out these attacks intended to deliberately target innocent civilians.”

Ambassador Prosor’s latest letter came just two days after he had sent a letter to the Security Council complaining of rocket attacks that had been launched from Gaza on October 26th, which struck near Ashdod. The letter fell on deaf ears, which is the most likely fate of his most current letter as well.

“Two days ago, I wrote to the Security Council and expressed my Government’s concern about the escalating violence emanating from Gaza, alerting the international community about the dangerous potential for civilian casualties,” Ambassador Prosor reminded the Council in his October 29th letter. “The Council did not utter a single word of condemnation. Today one Israeli civilian was murdered and others lay injured in hospitals this evening as a result of the escalating rocket fire – and we still only hear silence from the Security Council.”

Indeed, as Ambassador Prosor pointed out, the Security Council has failed to take any steps to ensure compliance with the provisions of Security Council Resolution 1860, passed on January 9, 2009, that called for a cease-fire in Gaza and an end to “illicit trafficking in arms and ammunition.” Instead, thousands of guns, rockets and mortars have continued to be smuggled into Gaza, facilitated by Iran. While Israel has shown extraordinary restraint in the face of continued rocket attacks against its citizens and has opened its borders with Gaza to many more shipments of goods and materials entering and exiting Gaza, the arms smuggling has increased. “The terrorist rockets in Gaza are traveling further, their warheads are getting larger and their method of delivery is becoming more sophisticated.” Ambassador Prosor warned the Security Council.

Most of the rockets were fired by Islamic Jihad, which is funded and armed by Iran and shares Hamas’s goal of destroying Israel. Israel quite appropriately holds Hamas, which has controlled Gaza for more than four years and is also aided by Iran, responsible for all attacks on Israel that emanate from Gaza.

At a time when Palestinian Authority President Mahmoud Abbas is trying to convince the Security Council that he represents a government worthy of becoming a member state of the United Nations, he remains silent as terrorist attacks continue to be launched from a Palestinian territory he is utterly incapable of controlling.

Abbas did finally bring himself to admit that the Arab world should not have rejected the United Nations’ 1947 plan to partition Palestine into a Palestinian and a Jewish state.  “It was our mistake. It was an Arab mistake as a whole,” Abbas said during an interview on Israeli TV on October 28th. But then he complained that the Palestinians were still being punished for the mistake the Arabs made 64 years ago. Although Abbas now cites the UN General Assembly partition resolution (Resolution 181) as a legal basis for his bid for Palestinian state membership status in the United Nations, he is perpetuating the same mistake made by the Arabs back in 1947. He refuses to recognize the right of a “Jewish State” to exist side-by-side with an Arab state, which is central to the partition resolution he only selectively adopts today.

The Palestinians continue to demand all of the rights and privileges of statehood without assuming any reciprocal responsibilities. For example, while insisting on the pre-1967 lines as the recognized international border with Israel, the Palestinians also demand that pre-1967 Israel be flooded with millions of Palestinians exercising their so-called “right of return.” That is like neighbor A insisting that neighbor B strictly abide by the terms of a disputed surveyed line while neighbor A gets to move his huge extended family into neighbor B’s house.

Before the Security Council proceeds to a final decision on the Palestinians’ application for UN member state status, it should respond affirmatively to Israeli Ambassador Prosor’s plea to “act with a common purpose against the escalating violence flowing from Gaza” and to condemn continued Palestinian terrorism against innocent Israeli civilians. Ambassador Prosor has put the Security Council and the Palestinians on notice. There will be “serious consequences for continued rocket fire,” he said. “Israel has exercised and will continue to exercise its right to self-defense, as appropriate, and will take all necessary measures to protect its citizens.”

If the Security Council puts its head in the sand as expected, it will bear full responsibility for the consequences.