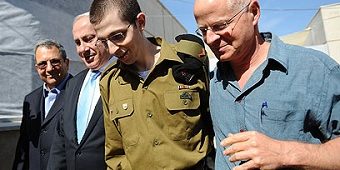 Gilad arrived by helicopter at Israel’s Tel Nof Airforce Base where he met Prime Minister Netanyahu just before meeting his parents and family for the first time after more than five years.

Prime Minister Benjamin Netanyahu, in his first public announcement after greeting Gilad and escorting him to see his parents, spoke about the fact that Israel pardoned and released over 1000 prisoners in exchange for Gilad, a price some believe may be too high.

“I would like to make it clear: We will continue to fight terrorism. Any released terrorist who returns to terrorism – his blood is upon his head. The State of Israel is different from its enemies: Here, we do not celebrate the release of murderers. Here, we do not applaud those who took life. On the contrary, we believe in the sanctity of life. We sanctify life. This is the ancient tradition of the Jewish People.

Netanyahu concluded his remarks by pointing out that tomorrow evening the Feast celebration of Simchat Torah will begin and that how, on this coming Sabbath we will begin to read the portion of Bereshit, in the words of the prophet Isaiah (42:7).

‘To bring out the prisoners from the dungeon, and them that sit in darkness out of the prison-house.’ Today, I can say, on behalf of all Israelis, in the spirit of the eternal values of the Jewish People: ‘Your children shall return to their own border (Jeremiah 31:17).’ Am Yisrael Chai! (The People of Israel live!).”

In the meantime, celebrations continue in Jerusalem with the annual Jerusalem March, though this years parade promises to be much more celebratory than years past. Thousands of Christians from some 80 nations will join the Jerusalem March, an annual parade during the holiday of Sukkot, which has become an expression of solidarity with Israel.

The Christian marchers are in Israel participating in the annual Christian celebration of the Feast of Tabernacles, sponsored by the International Christian Embassy Jerusalem.

“It is good for our Feast pilgrims from around the world to be here to express our solidarity on such a momentous day, as they will also see and experience first-hand what Israel is going through as Gilad Schalit returns home,” said ICEJ Executive Director Dr. Juergen Buehler. “We share the relief and joy of the Schalit family and all Israel that Gilad has come back alive. We also share the disgust of so many that the price for his return has meant having to set ruthless murderers free. These are the paradoxes which Israel constantly lives with, and our pilgrims will no doubt return to their own nations with a deeper appreciation of Israel’s unique struggles and an even stronger commitment to standing with the Jewish state and people.”

The ICEJ’s Feast pilgrims is the largest and most colourful delegations in the Jerusalem March.

The Christian Embassy’s week-long Feast of Tabernacles celebration continues to be the largest solidarity mission to Israel this year, and the nation’s largest annual tourist event. Approximaely 6,000 Christians from more than 80 nations are participating in the festivities, which will conclude tonight at the Jerusalem Convention Center. Israel’s deputy Foreign Minister, Daniel Ayalon, will give the farewell address.