Over 6,000 Christian Pilgrims arrive for annual Feast of Tabernacles 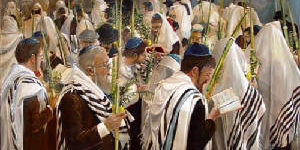 Over 6,000 Christian pilgrims, have arrived in Israel for the annual Feast of Tabernacles the largest tourism event in Israel, which attracts many Evangelical communities worldwide. The annual convention is hosted and organized by the International Christian Embassy in Jerusalem and includes visits to religious sites throughout the country, lectures and seminars, as well as participation in the Jerusalwem March on October 18. This years feast theme is “Israel – A Light Unto the Nations” and is taking place in Israel October 11-18.

Israel’s Minister of Tourism, Stas Misezhnikov announced “I welcome the thousands of Christian tourists arriving in Israel during the holiday of Sukkot”. The Jewish holiday began last night October 12 and continues through Simhat Torah on October 19.

This Friday, October 14th, 2011, the pilgrims will host a festive event at the Dead Sea, after touring the region. The Dead Sea is one of the holiest sites in the Christian faith, thanks to the discovery of the Dead Sea Scrolls at Qumran, and the vicinity to Qasr al Yehud, the site in which, according to Christianity, Jesus was baptized for the first time by John the Baptist.

The Dead Sea has been nominated to be included in the new 7 Wonders of Nature, the selections of which will be made public later this year. The annual Feast of Tabernacle event will take place on the ground of Ein Gedi Spa on Friday afternoon at 15:30 pm.m during which participants will vote by SMS for the Dead Sea. Following the vote there will be a festive meal and musical celebration. According to the New 7 Wonders of Nature Fund, the Dead Sea is considered a leading candidate with many votes, but will need 350 million votes to win the competition.

The annual Feast of Tabernacles is an extremely important contributor to Israel’s local economy generating thousands of bednights at hotels, patronage at restaurants, as well visits to many sites and associated gift purchases. It is estimated that 25-30 million NIS will be spent in Israel during the week-long event this year.