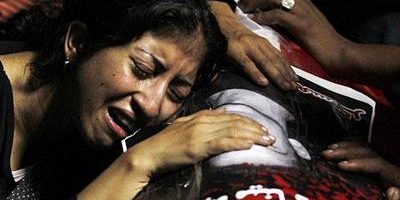 Have you ever seen a pogrom? Sarah Carr has.

“The Coptic Hospital tried its best to deal with the sudden influx of casualties,” wrote Carr, a Cairo-based journalist and blogger, in her firsthand account of Sunday’s deadly attack on Christian protesters by the Egyptian military. “Its floors were sticky with blood and there was barely room to move among the wounded.”

In one room of the hospital morgue Carr counted the bodies of 12 people, some of whom had been killed when soldiers in armored personnel vehicles charged the crowd, firing and random and crushing the protesters they ran over. One of the victims was “a man whose face was contorted into an impossible expression. A priest . . . showed me the remains of the man’s skull and parts of his brain. He too had been crushed.”

What happened in Egypt on Sunday was a massacre. Government security forces assaulted Coptic Christians as they marched peacefully to the headquarters of the state TV network. They were protesting the recent burning of St. George’s, a Coptic church in the Upper Egypt village of El-Marinab. Yet broadcasters loyal to the ruling military junta exhorted “honorable Egyptians” to help the army put down the protests. “Soon afterward, bands of young men armed with sticks, rocks, swords, and firebombs began to roam central Cairo, attacking Christians,” the Associated Press reported. “Troops and riot police did not intervene.” Graphic video of the violence was quickly uploaded to the Internet. So were even more graphic images of the murdered protesters.

Back during the Tahrir Square demonstrations against strongman Hosni Mubarak, the Egyptian military was widely praised for not using force to crush the protests and keep Mubarak in power. Then-Defense Secretary Robert Gates, for example, declared that Egypt’s military had “conducted itself in exemplary fashion” and “made a contribution to the evolution of democracy.” Popular, too, was the notion that the uprising could catalyze a new era of interfaith solidarity. “Egypt’s religious tensions have been set aside,” reported the BBC in February, “as the country’s Muslims and Christians join forces at anti-government protests.”

But the “spirit of Tahrir Square” has ushered in neither liberal democracy nor a rebirth of tolerance for Egypt’s ancient but beleaguered Christian minority.

One of the country’s leading liberal reformers, Ayman Nour, said Monday that with the latest bloodshed, the military has lost whatever goodwill it accrued last spring. It’s hard to believe that the ruling Supreme Council of the Armed Forces cares. In the eight months since Mubarak’s ouster, the military has tried and convicted some 12,000 Egyptian civilians in military tribunals, often after using torture to extract confessions. The country’s hated emergency laws, which allow suspects to be detained without charge, not only remain in force, but have been expanded to cover offenses as vague as “spreading rumors” or “blocking traffic.” And just as Mubarak did, the generals insist that government repression is all that stands between Egypt and social chaos.

As for Egypt’s Coptic Christians, their plight has gone from bad to worse. Post-Mubarak Egypt has seen “an explosion of violence against the Coptic Christian community,” the international news channel France24 was reporting as far back as May. “Anger has flared up into deadly riots, and houses, shops, and churches have been set ablaze.”

With Islamist hardliners growing increasingly influential, hate crimes against Christians routinely go unpunished. Copts, who represent a tenth of Egypt’s population, are subjected to appalling humiliations. The mob that destroyed St. George’s had first demanded that the church be stripped of its crosses and bells; after the Christians yielded to that demand, local Muslims insisted that the church dome be removed as well. For several weeks, Copts in El-Marinab were literally besieged, forbidden to leave their homes or buy food unless they agreed to mutilate their nearly century-old house of worship. On September 30, Muslim thugs set fire to the church and demolished its dome, pillars, and walls. For good measure, they also burned a Coptic-owned shop and four homes.

Many Copts are choosing to leave Egypt, rather than live under this intensifying anti-Christian persecution. The Egyptian Union of Human Rights Organizations calculated last month that more than 90,000 Christians have fled the country since March 2011. At that rate, estimated human-rights advocate Naguib Gabriel, one-third of Egypt’s Coptic population will have vanished within a decade.

Or maybe sooner — maybe much sooner — if Sunday’s anti-Christian pogrom is a sign of things to come.