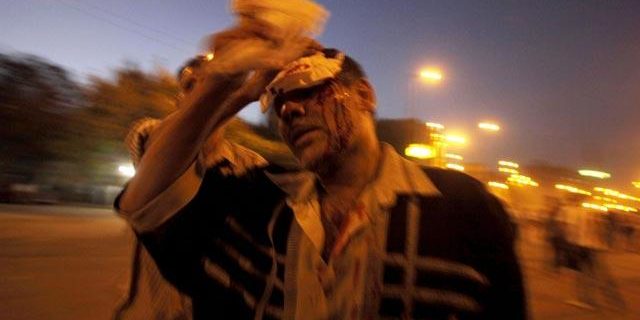 Several hundred Christians pelted police with rocks outside a Cairo hospital Monday in fresh clashes the day after 24 people died in riots that grew out of a Christian protest against a church attack. Sunday’s sectarian violence was the worst in Egypt since the uprising that ousted Hosni Mubarak in February.

Egyptian Prime Minister Essam Sharaf warned in a televised address that the riots were another setback on the country’s already fraught transition to civilian rule after three decades of Mubarak’s authoritarian government.

“These events have taken us back several steps,” Sharaf said. He blamed foreign meddling for the troubles, claiming it was part of a “dirty conspiracy.” Similar explanations for the troubles in Egypt are often heard from the military rulers who took power from Mubarak, perhaps an attempt to deflect accusations that they are bungling the management of the country.

“Instead of moving forward to build a modern state on democratic principles, we are back to seeking stability and searching for hidden hands — domestic and foreign — that meddle with the country’s security and safety,” Sharaf said.

The clashes Sunday night raged over a large section of downtown Cairo and drew in Christians, Muslims and security forces. They began when about 1,000 Christian protesters tried to stage a sit-in outside the state television building along the Nile in downtown Cairo. The protesters said they were attacked by “thugs” with sticks and the violence then spiraled out of control after a speeding military vehicle jumped up onto a sidewalk and rammed into some of the Christians.

Most of the 24 people killed were Coptic Christians, though officials said at least three soldiers were among the dead. Nearly 300 people were injured. Egypt’s official news agency said dozens have been arrested.

The latest clashes Monday broke out outside the Coptic hospital where many of the Christian victims were taken the night before. The screams of grieving women rang out from inside the hospital and some of the hundreds of men gathered outside held wooden crosses. Empty coffins were lined up outside the hospital.

There was no word on casualties from Monday’s clashes.

Christians, who make up about 10 percent of Egypt’s 85 million people, blame the ruling military council for being too lenient on those behind a spate of anti-Christian attacks since Mubarak’s ouster. The chaotic power transition has left a security vacuum, and the Coptic Christian minority is particularly worried about a show of force by ultraconservative Islamists, known as Salafis.

In recent weeks, riots have broken out at two churches in southern Egypt, prompted by Muslim crowds angry over church construction. One riot broke out near the city of Aswan, even after church officials agreed to a demand by ultraconservative Muslims known as Salafis that a cross and bells be removed from the building.

Aswan’s governor, Gen. Mustafa Kamel al-Sayyed, further raised tensions by suggesting to the media that the church construction was illegal.

Christian protesters are demanding the ouster of the governor, reconstruction of the church, compensation for people whose houses were set on fire and prosecution of those behind the riots and attacks on the church.

Sunday’s violence will likely prompt the military to further tighten its grip on power.

The ruling military council led by Field Marshal Hussein Tantawi, defense minister of 20 years under Mubarak’s former regime, took over after the 18-day popular uprising forced Mubarak to step down. The military initially pledged to hand back power to a civilian administration in six months, but that deadline has passed, with parliamentary elections now scheduled to start in late November. According to a timetable floated by the generals, presidential elections could be held late next year.

Already, the military council said it had no intention to lift the widely hated emergency laws in place since Mubarak first took office in 1981.

Tension has been growing between the military and the youth groups that engineered the uprising, with activists blaming the generals for mishandling the transition period, human rights violations and driving a wedge between them and ordinary Egyptians.

“The army incites sedition to remain in power,” said Mariam Ayoub, a relative of a slain Christian protester, Michael Mosaad, as she stood outside the Coptic hospital. “They tell all of us that this is what happens without emergency laws.”

State television said authorities stepped up security at vital installations in anticipation of renewed unrest, deploying additional troops outside parliament and the Cabinet. Riot police were also stationed outside the Coptic hospital. Funeral services were planned in the afternoon at the main Coptic Cathedral in Cairo.

The clashes on Sunday night did not appear to be exclusively sectarian.

State TV, which has been growing increasingly loyal to the military, appealed for “honorable” Egyptians to protect the army against attacks as news spread of clashes between the Christian protesters and the troops outside the TV building. Soon afterward, bands of young men armed with sticks, rocks, swords and firebombs began to roam central Cairo, attacking Christians. Troops and riot police did not intervene to stop the attacks on Christians.

Throughout the night, the station cast the Christian protesters as a violent mob attacking the army and public property. At one point, Information Minister Osama Heikal went on the air to deny that the station’s coverage had a sectarian slant, but acknowledged that its presenters acted “emotionally.”

The military council ordered the Cabinet to investigate the violence and pledged measures to safeguard Egypt’s security.