PM: We may not have enough voices to stop UNSC vote 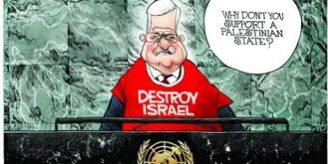 By TOVAH LAZAROFF IN NEW YORK AND JPOST.COM STAFF

Prime Minister Binyamin Netanyahu said he is not sure Israel and the United States will be able to enlist enough votes against the Palestinian application for UN membership in order to prevent it from coming to a vote in the UN Security Council, Israel Radio reported Monday citing a BBC Arabic interview.

As the Security Council prepares to deal with the request on Monday, it was still unclear if the Palestinians would have the necessary nine votes to pass their measure in the 15-member body, which approves all membership applications to the United Nations.

As of Sunday, it appeared as if Britain, France, Germany, Columbia, Portugal, and possibly Bosnia, would reject the measure.

The United States has said it would use its veto power if necessary to reject the move, but Israel and the US have lobbied to gain enough support against the statehood bid to make the use of the veto-power unnecessary.

Netanyahu also gave a nod in the direction of the Arab peace initiative of 2002, during an interview to BBC’s Arabic service on Sunday.

“I have noticed the Arab Peace Initiative. This is a huge improvement compared with the ‘No’s’ of Khartoum,” he said.

“If it is open for negotiation, then this is an important opportunity,” he said, according to information given to the paper by a source in the Prime Minister’s Office. Although Netanyahu spoke in English, his words will be dubbed into Arabic and broadcast after the paper goes to print.

According to the source, Netanyahu spoke generally about the Arab peace initiative, but did not specify whether he was referring to the initial proposal by Saudi Arabia, or the initiative that was adopted by the Arab League.

Netanyahu said it was possible to resolve the settlement issue and that those Jewish communities only take up 1.5 percent of the West Bank.

He spoke with the BBC in New York as he wrapped up a five-day trip to the city, during which he addressed the United Nations General Assembly, and worked behind the scenes to prevent the Palestinians from submitting a bid for UN membership.

The key public moment of his trip occurred on Friday, when Netanyahu spoke to a subdued audience at the UN.

Although he failed to receive the same enthusiastic support that greeted Palestinian Authority President Mahmoud Abbas, who also addressed the General Assembly on Friday, Netanyahu heads back to Israel on Sunday having secured behind-the-scenes victories.

His willingness to work with the Quartet on a new peace initiative that sets a new date of December 2012 for Israelis and Palestinians to complete a final-status agreement, earned him increased support among Europeans and Americans.

The Palestinians, in turn, have so far refused to consider it.

Although Netanyahu has yet to consult with his key ministers, Israel has responded favorably to the proposal. It was unclear Sunday if the proposal will be brought to the full cabinet or the security cabinet.

Secondarily, the New York visit marked a turning point in support against the Palestinian’s bid for membership in the United Nations.

Israel’s Ambassador to the United States Michael Oren told The Jerusalem Post, “Netanyahu had an extraordinarily successful visit here in New York in terms of public diplomacy and his appearance on American television. His interviews, were an unqualified success.”

“The United States and Israel are more closely coordinated now than they have been at any time in the last two years. We see things very much eye-to-eye on how to move forward. We see the United States as Israel emphasizes that there is no alternative to direct negotiations,” Oren said.

In his BBC interview, Netanyahu said that the new 2012 date was a reality if the parties were committed and serious.

He repeated a phrase that he made at the UN, that the Israelis and the Palestinians “must speak doogri (straightforward).”

“I am an Israeli leader who can bring peace. I hope that Abu Mazen understands that now is his chance. I can not make peace with one hand,” said Netanyahu. He added that he was more flexible than former prime minister Yitzhak Rabin.

Netanyahu said that he and his people were “thirsty” for peace and that he wanted to stand on the same podium as Abbas and proclaim peace.