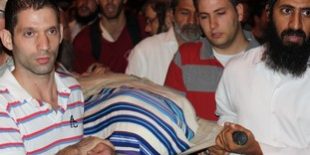 More than a thousand people crowded a parking lot in Kiryat Arba on Sunday evening, to bid farewell to Asher Hillel Palmer and his infant son, Yonatan, who died when their car overturned on Route 60 outside Kiryat Arba on Friday, in what police and the army suspect was a terror attack.

Asher’s brother-in-law, Aharon Peretz told the mourners, “Asher, you were my beloved, noble brotherin- law. Yonatan, my nephew, people used to stop me in the street and say what a little angel your sister has, with eyes as blue as the heavens, a baby that at only 10 months old started to walk. Asher, the love of my heart, who never said anything loud, always spoke softly, always with a pure heart.”

After the eulogies ended, mourners carried the body of Asher and a tiny prayer shawl carrying Yonatan to a waiting van, in which they were taken for burial in Hebron.

Controversy and anger surrounds the incident, in that after the accident security services said there was suspicion that the accident may have been caused by stone-throwers, a statement that was later retracted, only to emerge again on Sunday.

Contrary to settler claims, senior IDF officers told reporters in briefings on Saturday that while soldiers at the scene on Friday had not seen any stone-throwing, the army and the police were looking into the possibility that a rock had been thrown from a passing car.

Across the settlements of Judea and Samaria, voices are claiming that security officials covered up the stone-throwing in order to prevent “price tag” actions by settlers on the same day the Palestinians were presenting their statehood bid at the United Nations.

Details of the incident began to emerge on Sunday, after the family of Palmer, 25, reached an agreement with the state to allow for blood samples to be taken from his body and that of Yonatan, in order to determine the cause of death.

Palmer’s family had initially refused the state permission to conduct an autopsy on the bodies, and the state petitioned the Jerusalem Magistrate’s Court against the family’s decision.

When the court refused the petition, the state immediately appealed the lower court’s ruling directly in the High Court of Justice.

The High Court issued a temporary injunction delaying the magistrate’s court’s ruling ahead of a hearing scheduled for Sunday, but the hearing was cut short after both sides reached an agreement that blood samples could be taken from the bodies.

Police spokesman Micky Rosenfeld said Sunday that “based on the findings of the external autopsy, the main direction of the investigation is that he was hit by a stone that caused him to lose control of the vehicle.”

Rosenfeld said police found the stone, but it didn’t know when it was thrown at the car and the investigation is still ongoing.

The IDF Spokesman’s Office said Sunday evening that its findings have reached the conclusion that stones were not thrown at the car from the side of the road, but findings that have turned up since then have raised the possibility that a stone was thrown at the vehicle from a passing car. They said it is still under investigation.

Anger at the incident was palpable on the way to Kiryat Arba on Sunday, where traffic crawled to a halt for several kilometers while clashes broke out between settler youth and Palestinians next to the Palestinian village of Beit Anoun. In addition, well more than a hundred people took part in a protest held at the site of the accident on Sunday afternoon, before marching to Kiryat Arba.

At the rally Sunday, Chief Rabbi of Hebron and Kiryat Arba Dov Lior said “there are murderous rioters in our midst. According to the Torah, there is room for collective punishment and it is up to the IDF to carry this out. There are no innocent people in war.”

Head of the Kiryat Arba local council, Malachi Levinger, said Sunday “there must be an investigation into why the police changed its story within less than 48 hours. The rock-throwing, which is a growing phenomenon in recent days has become unbearable. We are demanding that security forces work to completely end this phenomenon, which constitutes a mortal threat not only to human lives but also harms the honor of the state and its citizens.”   Download JPost’s iPhone application  Subscribe to our Newsletter to receive news updates directly to your email