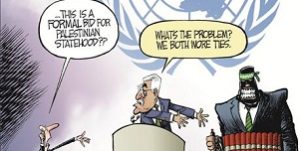 Some 150 countries appear ready to vote in the United Nations General Assembly to recognize Palestine as an “observer state” and would be ready to recognize it as a “member state” if the United States did not plan to veto such a proposition in the U.N. Security Council.

They are prepared to do this even though Palestine does not have a government that is sovereign over the entire territory that is presumed to be Palestine. In other words, Palestine lacks the single most fundamental attribute of statehood. As everyone knows, there are two governments in charge: Fatah rules the West Bank, Hamas rules Gaza, each with its own security forces (not to mention other free-standing militias).

This is a travesty. And it should make one give second thought to America’s Founding Fathers’ admonition that we pay a decent respect to the opinions of mankind.

Not to mention that the proposed resolution, so far as we know, provides for the state of Palestine to be drawn along the 1967 borders that are, in fact, the 1949 armistice lines expressly designed not to prejudice any future determination of borders.

Not to mention that one of the two governments of Palestine, Hamas, is a virulently anti-Semitic organization – perhaps, neo-genocidal would be the correct adjective – whose own charter repeats the anti-Semitic tropes of yesterday’s Europe while insisting that no inch of “historic Palestine” (meaning the 1923 borders, not the 1967 “borders”) can be ceded to the Jews.

If the president of the United States were, say, a cowboy, he probably would withdraw all U.S. funding from the United Nations – not without reason. But, in 2011, that is not going to happen.

So let me make a constructive suggestion that the Obama administration could reasonably be expected to execute and could possibly save Palestine from its own destructive self, since right now it is hard to see how Palestinian Authority President Mahmoud Abbas could prevent Hamas from being the prime beneficiary of all the events that ensue from this historic vote, including possibly a third Intifada, as events spin out of control. Even short of that, there will likely be no further negotiations for years to come as a result of this Palestinian violation of the Oslo Accords.

Washington does not want to be placed in the position of vetoing a resolution recognizing Palestine as a member state of the U.N., for that would place the United States out of step with the vast majority of the rest of the world – especially the Muslim world. That would doom a key element of U.S. foreign policy under Mr. Obama, which has been the attempt to remake relations with the Muslim world and set them on a positive footing.

Therefore, its only recourse is to put forth an alternative resolution that provides for Palestine to become a member state while also ratifying Israel’s existence as a Jewish state along the lines explicitly envisaged in the 1947 U.N. Partition Plan. In addition instead of establishing the 1967 lines as the borders, it should call for borders to be negotiated on the basis of the 1967 lines on the understanding that those lines are themselves subject to agreement on land swaps, as Mr. Obama urged in his speeches last May.

But even this would not solve Mr. Abbas‘ problem, which is not Israel, but Hamas. So long as Hamas is in the picture, peace is impossible – not just between Palestine and Israel, but within Palestine itself. You don’t need secret documents to determine what Hamas is up to; they spell it all out in their charter and have never since hesitated to articulate their goal – the destruction of the Jewish state and its replacement by an Islamist state.

If the U.N. really wanted to ensure peace between a Palestinian state and a Jewish state – and in the process, save Palestine from itself – it would do what Mr. Abbas has been too weak to accomplish: the disarmament of Hamas and the renunciation of its charter. These are essential ingredients in any alternative resolution offered by the United States.