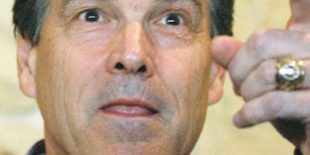 BY REBECCA STOIL AND JPOST STAFF—

Both US Republican  presidential front-runners slammed US President Barack Obama’s policy on  Israel Tuesday morning, days before the expected United Nations vote on  Palestinian statehood.  Texas Governor Rick Perry and former  Massachusetts governor Mitt Romney blamed Obama for the upcoming UN  vote, even though the US delegation was expected to veto the Palestinian  initiative in the Security Council.

Speaking at a Likud  supporters’ rally in New York City, Perry said that he was “indignant of  the Obama administration and their Middle East policy of appeasement  that has encouraged such an ominous act of bad faith.  Simply put, we  would not be here today at this very precipice of such a dangerous move  if the Obama policy in the Middle East was not naive and arrogant,  misguided and dangerous.”

Perry  blasted what he described as “the Obama policy of moral equal which  gives equal standing to the grievances of Israelis and Palestinians  including the orchestrators of terrorism,” describing it as “a very  dangerous insult.”

“There is no middle ground between our allies  and those who seek their destruction,” Perry told the Likud supporters.  “America should not be ambivalent between the terrorist tactics of Hamas  and the security tactics of the legitimate and free state of Israel.”

In  advance of the speech, Perry’s closest rival, Romney, called on the US  to cut aid to the Palestinians, and also blamed Obama for causing the  current “diplomatic crisis” at the UN.

Romney said that he  believes the US should “cut foreign assistance to the Palestinians, as  well as re-evaluate its funding of UN programs and its relationship with  any nation voting in favor of recognition” for Palestinians at the UN.  He added that the Palestinian petition at the UN is the “culmination” of  the president’s policies, which have shown disregard for the Israeli  position.

Obama, said Romney, has made “repeated efforts over  three years to throw Israel under the bus and undermine its negotiating  position,” and that Obama must “reaffirm the United States’ commitment  to the security of Israel and its continued existence as a Jewish state”  during his speech at the UN this week.

Romney insisted that  Obama should declare the US will cut funding to the Palestinian  Authority – $500 million annually in aid – and reevaluate its relations  with any nation that votes in favor of Palestinian state recognition.

NJDC  President and CEO David A. Harris issued a statement claiming that  “Perry’s comments today demonstrate that he clearly has little command  of the U.S.-Israel relationship and even less interest in preserving the  historic bipartisan support for Israel. His baseless attacks on  President Barack Obama’s strong record of support for Israel and the  actions that the President and his Administration are taking to beat  back the Palestinian’s unilateral initiative are nothing more than a  deeply disturbing ploy to inject domestic politics into the U.S.-Israel  relationship.”

Harris’s complained that “it is long past time for  Perry and other Republicans to heed the advice of those genuinely  working towards bipartisan support for Israel, and to quit playing  political games with support for Israel.”

“It appears that Perry and others like him are not thinking beyond their immediate political concerns,” he said.

Two  weeks ago, Perry entered the foreign policy debate surrounding  America’s support for Israel in an opinion piece in the Wall Street  Journal, in which he said that he supported the US utilizing its  Security Council veto, but that he believed cutting aid to the  Palestinians should be conditional to their willingness to return to  negotiations with the Israelis.

Also on Tuesday, a group of  fourteen US senators called on Obama to “issue a strongly worded defense  of Israel during his address to the United Nations General Assembly on  Wednesday,” and said that “political and physical” attacks on Israel  threaten Middle East peace and stability.

The senators wrote a  letter to the US president, in which they highlighted the recent  “troubling” developments in the Middle East, including the storming of  the Israeli embassy in Cairo, the anti-Israel rhetoric of Turkish Prime  Minister Recep Tayyip Erdogan, and the unilateral Palestinian decision  to head to the UN for state recognition.

“We believe it is  imperative for you to speak strongly, forthrightly and publicly about US  concerns over these developments,” the senators wrote, adding “we need  to make it clear that we will not tolerate continued threats to Israel  by governments or individuals in the region or attempts to delegitimize  Israel at the UN or other international forums.”

Gil Hoffman contributed to this report.