Palestinians Bring Their Intifada to the United Nations 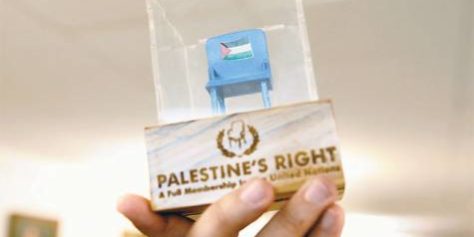 Palestinian Authority President Mahmoud Abbas threw down the gauntlet in his September 16 address to the Palestinian people, televised from his Ramallah headquarters. He said he will take the Palestinians’ request for full United Nations member state recognition to the U.N. Security Council on the basis of the 1967 territorial lines, even though he knows that the U.S. has vowed to veto such a resolution. Abbas is asking the international community to formally ratify the exact physical boundaries of an independent Palestinian state on Palestinian terms.

Members of the Palestinian observer delegation to the U.N., wasting no time, were seen celebrating late that night at the expensive New York City eatery, Cipriani Downtown. The Palestinians’ intifada is coming to the United Nations.

“We are trying to get a full membership in the U.N., on the 67 borders, so we will be able, afterwards, to go back to negotiations…during which we will discuss final status issues, Jerusalem, refugees, borders, water, security, settlements and the issue of our prisoners, that by that stage will be prisoners of war, not terrorists or criminals. Even if this won’t be the case, they will be our top priority,” said Abbas. “The decision has been already taken and we aren’t intending to withdraw it. As soon as I give my speech at the UN General Assembly, I will hand the bid to UN Secretary General Ban Ki-moon to pass it to the president of the Security Council.”

The rotating presidency of the UN Security Council this month just happens to belong to Lebanon, whose government is now controlled by the terrorist organization Hezbollah. Abbas wants to get his statehood bid on the Security Council agenda in September, knowing that Lebanon will use its position to keep the issue front and center and turn the Security Council into a public platform for the Palestinians to exploit.

However, Abbas has been having difficulties with convincing his own “partner” in the future Palestinian “unity” government, Hamas, that the UN statehood gambit is the appropriate strategy.

In an embarrassing blow aimed directly at undermining Abbas’s authority before his speech to the UN General Assembly next week, Hamas officials have been publicly very critical of Abbas’s strategy. They said that Abbas was acting alone in a useless stunt, without taking Hamas’s position into consideration.

“The speech is an attempt to justify the negotiations,” said Mahmoud Zahar, a Hamas leader. A Hamas spokesperson, Sami Abu Zuhri, dismissed the statehood bid led by Abbas as a “symbolic” act, adding that “the Palestinian people will accept nothing less than the flag waving above the United Nations building.”

Note that the Hamas spokesperson called for the Palestinian flag to wave above the United Nations building, not simply alongside the other 193 member state flags flying side by side in front of the U.N.

If Abbas does move forward with his application for U.N. state membership and hands the application to Secretary General Ban Ki-moon, Ban is supposed to review the application to determine if it is in proper order before sending it on to the president of the Security Council. “When I receive an application from a State for admission into the United Nations, I review all these technical issues — whether this application is in proper form and stating that they are committed to implementing all the Charter provisions. Then, I refer it to the Security Council,” Ban told U.N. correspondents at his press conference on September 15th.

However, Ban will not go out on a limb and examine the application objectively. He has already made it clear that he is sympathetic to the Palestinian bid. He told Al Jazeera in a one-on-one interview on September 15th, for example, that the Palestinian bid for recognition by the U.N. is “understandable.”

In his remarks during a press conference on that same day, Ban blamed Israel for the stalled negotiations. He said that it was up to Israel to create the conditions favorable to negotiations for a two-state solution. “Time is not our friend,” Ban said. “The issuing of all these settlements, new settlements, has not been favourable, has not been helpful.”

And what did the Secretary General ask from the Palestinians in return?  “At the same time, the Palestinians should also try to sit together with the Israeli people,” Ban urged. “I am sympathizing with all these frustrations of the Palestinian people whose aspirations for an independent State has not been realized in the context of this two-State solution. That is why I am calling that time is not our friend.”

A leaked high-level internal U.N. document dated September 15, 2011, made available to me, sets out the U.N. bureaucracy’s official pro-Palestinian position on a number of contentious issues, including the definition of the term “Occupied Palestinian Territory.” It was defined to include the West Bank, East Jerusalem, and the Gaza Strip. The U.N. bureaucrats who wrote this one-sided document have apparently forgotten that Israel unilaterally withdrew from Gaza in good faith in 2005, only to see that land taken over by Hamas terrorists and used to launch attacks against Israeli civilians. The U.N. authors’ claim that East Jerusalem is part of occupied Palestinian territory ignores the fact that this old section of Jerusalem was illegally seized and annexed by Jordan during the course of the 1948 Arab-Israeli War​. Israel gained control of it only after Jordan attacked Israel during the 1967 Six Day War​ and was defeated. To claim that East Jerusalem is part of occupied Palestinian territory presupposes the outcome of the very negotiations that the U.N. document says must continue over final status issues.

The internal U.N. document also provides justifications for the Palestinians’ statehood bid to the U.N. The timing, the U.N. bureaucrats argue, is because of the stalled negotiations which “arise primarily from the persistence of occupation.” All of the blame for failed negotiations is placed on Israel. Neither Hamas, with its continued call for Israel’s destruction, nor Palestinian terrorism generally, are mentioned even once in the U.N. document.

Moreover, in the U.N. bureaucrats’ view, there already is de facto international recognition of Palestinian statehood, and the U.N. bid is intended to seek U.N. ratification of that statehood status: “The PLO declared statehood in 1988 and a majority of the world’s countries have already recognized a Palestinian State.”

However, under the “Montevideo Convention on the Rights and Duties of States,” used under international law in determining whether a new state has actually come into existence, the following criteria must be satisfied, which the Palestinians do not presently come close to satisfying. To qualify as a new state, the Palestinians must have: (1) a permanent population; (2) a defined territory; (3) a government; and (4) capacity to enter into relations with other states.

In short, there has to be a credible government in control of a permanent population within a defined territory. The Palestinians also lack clear and settled territorial boundaries, which, under the terms of U.N. Security Council Resolution 242, must be agreed upon first between the Israelis and Palestinians in negotiations leading to a “just and lasting peace.” And, despite the attempt at creatng a “unity” government bringing together the Fatah and Hamas factions, there are still two distinct governing authorities over the West Bank and Gaza respectively: Abbas’s party and Iran-backed Hamas, a terrorist organization whose very charter calls for the destruction of Israel and the killing of Jews.

As mentioned above, these competing Palestinian governmental authorities do not even agree on whether to go to the U.N. for statehood recognition in the first place.

The drama at the U.N. will play out over the coming days. European nations, particularly France, are apparently trying to steer the Palestinians away from the Security Council, although their official statements are in the nature of “let’s wait and see” and “it’s too premature to comment.” In a prediction that he later tried to back-pedal from, French U.N. Ambassador Gerard Araud said to reporters off camera, in response to a question about a Security Council vote on the Palestinian application for U.N. membership, that “t is irrelevant. It won’t come to us.”

For her part, the U.S. Ambassador to the U.N., Susan Rice, told reporters that “there are more than one, and perhaps several members of the Security Council, who are skeptical about the timeliness of action in the Security Council.” She did not name who those members are, however. “The issues are borders, security, the capital of a new state, refugees, water and all the very complex final status issues that can’t be decided by fiat and a piece of paper here in the United Nations, whether in the Security Council or the General Assembly,” Rice said.

When a vote on Palestinian statehood will actually occur depends on a number of variables. If the Palestinians do end up going to the Security Council, despite the French U.N. ambassador’s prediction to the contrary, the U.S. may try to delay any action there through procedural tactics, such as requesting a commission to study the application, which would put everything on temporary hold. However, since Lebanon holds the presidency of the Security Council this month and a majority of the Security Council members are unlikely to go along with procedural delays, such tactics will probably not work for very long.

Alternatively, if the French U.N. ambassador’s prediction is right, and the Security Council is by-passed altogether, the Palestinians would be able to go to the General Assembly right away for a vote on observer state status.

Observer state status would not give the Palestinians full U.N. membership privileges, such as voting rights. However, the upgrade in status would enable them to join various U.N. bodies and, as a treaty member, join the International Criminal Court​, which they can leverage to hound Israel with trumped up charges of “war crimes” that the Palestinian terrorists themselves have been committing for many years.

Frustrated with trying to pressure Israel into an agreement on the Palestinians’ terms that would amount to a suicide pact for Israel, Abbas is counting on a vote at the United Nations to undermine Israel’s legitimacy in the international community and to create favorable conditions for what he hopes will be a final, successful intifada.