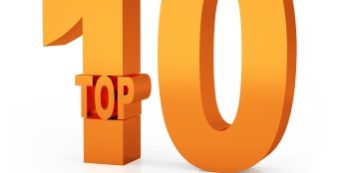 An American TV talk show host has popularized the idea of “Top Ten” lists. Of course, his lists are designed to be humorous and entertaining. Nonetheless, I thought it would be helpful to list the “Top Ten” ways in which our US President Barack Obama has offended Israel. In the process, he has consistently proved that he sides with the Palestinian Arabs and Muslims rather than with our special American ally and friend, Israel.

1. Obama went to Cairo, Egypt, in the heart of the Arab and Muslim world last year and made an appeasement speech to the Muslims. No other American president has ever done that before. He purposely defied the Christian majority in our country by telling the Muslims that the United States is not a Christian nation and that Islam has always been an important part of the American culture and society.

2. Obama honored the Arabs and Muslims by giving his very first TV interview after being inaugurated president to the Arabic TV station, Al Jazeera, rather than to any American station. This Muslim TV station has been the primary propagator of anti-American and anti-Israeli news and propaganda across the Middle East. Obama made this appearance on a foreign, anti-American station even though most of the American media kowtowed to him during his presidential election campaign.

3. Obama has strongly denied Israel’s right to maintain Jerusalem as the undivided capital city of Israel. He wants the Israeli government to give half of this ancient Jewish city to the Palestinians, simply because they want to make East Jerusalem the capital of their new state. Yet it is the Israelis who have rebuilt the ancient biblical city into a thriving modern metropolis, and they are rightly proud of their gleaming capital.

4. Obama angrily tried to order Israeli Prime Minister Benjamin Netanyahu to halt construction of new homes for Jewish residents in East Jerusalem and Judea/Samaria (the so-called “West Bank”) in Jewish communities that he calls “settlements.” He calls the Jewish presence in these areas “occupation,” as if the Jewish people are illegally occupying land that belongs to the Palestinians. Judea and Samaria are the heartland of Biblical Israel, part of the land given by God thousands of years ago to the Jewish people as “an everlasting possession,” and there never has been an Arab or Palestinian state on that land.

6. Obama keeps telling Netanyahu that he should be doing more to help Palestinian leader Mahmoud Abbas. He blames Israel that the Palestinians have turned away from Abbas and his supposedly “moderate” Fatah party to side more strongly with the militant Hamas party. He says Israel should do more to help Abbas to improve his image and his support among his own people; however, Obama issued no demands for Abbas to change or improve himself.

7. Obama told Israel that it must not plan to strike Iran militarily in order to prevent Iran from carrying out its threat “to wipe Israel off the face of the map.” Even though Iran has made it clear that it intends to possess nuclear weapons and intends to use them against Israel, Obama told Israel that America will not allow Israeli planes to fly over Iraq and other Middle Eastern territory to carry out any bombing raids on Iran. Isn’t that something like siding with our enemy against our friend?

8. Obama has been silent while Abbas and the Palestinians have honored Arab terrorists as national heroes, even naming public places after terrorists who have collectively, and in a cowardly manner, murdered hundreds of innocent Jewish Israelis; yet there has never been any effort from the supposedly moderate Abbas to halt Arab terrorism. Only the effective work of the Israeli police and the IDF have served to protect the Israeli people.

9. Obama says nothing to discourage Fatah, Hamas, Hezbollah, the PLO and other Arab groups who have charters calling for the destruction of Jerusalem and Israel — and even for the annihilation of the Jewish race. He makes no demands for them to amend their charters.

10. Obama has shown his love and preference for Islam by inviting Muslims to the White House for Muslim religious ceremonies while canceling the Christians’ traditional National Day of Prayer service at the White House. The US has observed an annual National Day of Prayer since President Harry Truman signed it into law in 1952, yet suddenly our current president eliminated the tradition. He obviously does not accept that the providence of God founded this nation and has blessed and prospered it through its 230 years of history.

All of these are important current issues between Israel and the United States. We are sorry that our national government’s attitude toward our special friend and trusted ally, Israel, has soured so greatly since President Obama has taken office. However, Israeli Prime Minister Netanyahu also recently made the following explanation on American TV as to what is the real and most important issue. He said, “There is a bigger contest in our area, not just with the Palestinians. There is a much larger force of radical Islam that wants to eradicate peace. They want to eradicate Israel, and they want to eradicate the American presence in the Middle East.

“They hate America because of what America stands for. They’ll stop hating America only when America stops being America. When it stops espousing a free society, pluralism and open debate. That’s what they despise. And in fact, they don’t hate America because of Israel. They hate Israel because of America. They see us as an outpost of that free, open civilization that you represent. And you know what? They’re right.”

Prime Minister Netanyahu understands. It seems President Obama does not.