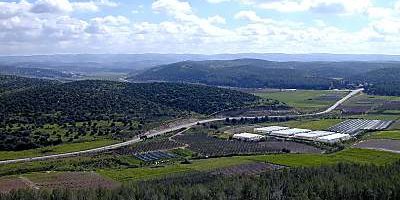 Today, September 13, 2011, will be a momentous day. Today, representatives of 193 countries are coming together on the east side of Manhattan for the opening of the 66th session of the United Nations General Assembly.

Of the 168 items on their agenda, one towers above the rest, guaranteed to dominate the 15-day event: Item #36 – “The question of Palestine.”

When that number comes up on September 20, the nations of this world will secure their places in the Valley of Jehoshaphat. For during the course of their deliberations, they will be called upon to vote for, or against, recognizing a Palestinian state.

Recognizing a Palestinian state means voting for the creation of an Arab state in the biblical heartland of the Land of Israel.

It means voting for the “permanent” division of God’s land.

“For behold, in those days and at that time,
When I bring back the captives of Judah and Jerusalem,
I will also gather all nations,
And bring them down to the Valley of Jehoshaphat;
And I will enter into judgment with them there
On account of My people, My heritage Israel,
Whom they have scattered among the nations;
They have also divided up My land.

Proclaim this among the nations:
“Prepare for war!
Wake up the mighty men,
Let all the men of war draw near,
Let them come up.
Beat your plowshares into swords
And your pruning hooks into spears;
Let the weak say, ‘I am strong.’”
Assemble and come, all you nations,
And gather together all around.
Cause Your mighty ones to go down there, O LORD.
“Let the nations be wakened, and come up to the Valley of Jehoshaphat;
For there I will sit to judge all the surrounding nations.
Put in the sickle, for the harvest is ripe.
Come, go down;
For the winepress is full,
The vats overflow—
For their wickedness is great.”
Multitudes, multitudes in the valley of decision!
For the day of the LORD is near in the valley of decision.
The sun and moon will grow dark,
And the stars will diminish their brightness.
The LORD also will roar from Zion,
And utter His voice from Jerusalem;
The heavens and earth will shake;
But the LORD will be a shelter for His people,
And the strength of the children of Israel.

“Who will endorse Palestine?” This question headlined an article on the Israeli Ynetnews website two weeks ago.

According to the report, officials in Jerusalem believe the “Palestinians” will secure an automatic majority due to the guaranteed support of the 116 “non-aligned” states,” which tend to vote as a bloc and promote joint interests. Just 12 more “yes” votes will secure a two-thirds majority. And on September 12, Russia announced its determination to support whatever the Palestinian Arabs want.

To try and offset the outcome, Israel’s foreign ministry has targeted the “moral majority” – influential states that include the 27 European Union members, global powers, and several other key countries.

Israel hopes the failure of such states to endorse a unilateral Palestinian move would render the UN decision illegitimate. To further this, officials in Brussels have worked on establishing a united front of EU states that would abstain. Still, it seems Europe’s votes will be split. Few if any nations are expected to vote “no.”

Despite having personally flown to various countries in recent months, appealing to leaders to reject the unilateral Palestinian move, Prime Minister Benjamin Netanyahu appears to be bracing for what now looks like the inevitable outcome.

Israel stands alone on the world stage. In fact, at the UN – and this is not new or rare –Israel will stand alone in the dock.

The universal recognition of “Palestine” as a state in its own right will be an indictment of the Jewish people, the world’s rejection and dismissal of their claims to their patrimony and a charge accusing them of usurping another people’s land.

The Palestine Liberation Organization (PLO) aka Palestinian Authority has already stated its intention to drag Israel before the International Court in The Hague.

However, the judgment on this event has already been determined and will soon be passed. It was seen thousands of years ago by the prophets of Israel who must have shivered as they recorded God’s expressions of His fury.

Joel 3, parts of which are quoted at the top of this piece, is only one of these warnings. Read the whole chapter. See also Isaiah 34, Isaiah 63, Psalm 94, .

God has a day of vengeance for the controversy of Zion. (Isaiah 34:8). He describes the valley of Jehoshaphat as the winepress of His wrath into which He will gather the nations. Soon – if He has not already begun – He will start to tread them out, crushing them like grapes beneath His feet.

How awful His judgment will be!

Fearful for their nations, believers in Europe and America have mobilized to act on Israel’s behalf. On September 12 The Jerusalem Post reported “two of the leading Christian groups in Europe have joined forces to counter mounting pressure on the Jewish state.” According to the report, the Dutch organization Christians for Israel and the Brussels-based European Coalition for Israel, will be holding joint protests today (September 13) in The Hague, and on September 19 in Brussels.

Although the Post failed to mention it, the initiative was launched by one man. Back in March, on the cover of the Dutch language publication of his organization “Pillar of Fire,” Jack van der Tang published a facsimile of the mobilization form for military service that the men of Holland received in 1939, when the Nazis were poised to invade them.

Inside the magazine, under the heading, “An urgent message to the church in the Netherlands (and worldwide),” Van der Tang posed the question:

Have you ever wondered what you would have done right before the Second World War, had you known that 6,000,000 Jews were going to be murdered? We did not yet know, then, about the death camps where the Holocaust would be carried out.  Now, in 2011, throughout the countries around Israel, millions are openly, and without shame, calling for the destruction of the Jews.  And we cannot say again, “we did not know.”

After listing the long and growing list of threats and dangers facing Israel, he concluded:

In 1939 a nationwide mobilization occurred in the Netherlands when it was clear that war was unavoidable.  Let there be an overall mobilization in the Church, today!

Other Christians – individuals and organizations – have followed Van der Tang’s lead. One man, a Czech citizen who has no organizational backing, alone successfully prepared a manifestation that will take place in Prague this evening. Events are scheduled for England too.

The men organizing these gatherings are driven by a) a strong sense of the fear of the Lord; b) a compelling love for the Jewish people and c) deep concern for their nations.

They know, as do many millions of Christians, that the motivation behind the upcoming vote is hardly a heartfelt desire to give the “poor Palestinians” a state of their own.

What will constrain the overwhelming majority – probably all – who choose in favor of Palestine, will be:

Whatever their individual motives, what these delegates will be voting for is the manifest theft of land belonging – by the decree of the Almighty; by international law as ratified at San Remo by the League of Nations and never revoked; and by all the rights that legitimize the existence of modern nation states – to the Jews.

For those who still don’t get this, let me spell it out once more:

It is THAT land the United Nations will vote this month on taking “legally” out of the hands of the Jewish people and placing into the hands of the Muslim Arabs – the vast majority of whom have been raised on a hate-rich diet of war mongering anti-Israel thoughts.

Recent weeks have seen some Israeli leaders and opinion shapers making calming statements – assuring their people that a General Assembly vote is not binding; that there is little if any point in trying to withstand it.

Darker voices warn that Arab and Muslim protests will be staged all over the world to “convince” the General Assembly in New York that the demand for the creation of Palestine is global and must be complied with.

A sweeping vote supporting the proposal is expected to – eventually if not right away – sway the Security Council towards making it legally binding on Israel.

So WHO is bringing the nations to New York to cast this fateful ballot? Who will lead them? Who will drive them?

The answer, I believe, is the LORD God. For decades they have been pulling and pushing Israel around, instigating wars against her, fomenting hatred of her, taking advantage of her, plotting against her, holding her in derision, and just bullying her relentlessly and heartlessly, in a never-ending way.

But now, now comes the time to decide. God is giving them the choice. For some nations – those that long ago sold their souls to the devil, voting to divide the land of Israel will be easy and quick. For others, there will be ethical and moral questions to weigh up. These nations know that they know that to recognize Palestine will be to do a terrible injustice to the Jews. Will they still proceed?

The few Judeo-Christian nations still left may be given pause by the fact that the Holy Bible contains the unambiguous title deed to the ancient Holy Land.

The time, it appears, is here. The nations have to decide and the choice they make will be read out in the “valley of decision,” the Valley of Jehoshaphat. Multitudes, it says, will be there.

The Valley of Jehoshaphat is a small, nondescript gully that feeds into the northern end of the Kidron Valley, in the shadow of the Mount of Olives.

I pointed it out last week as I guided a group from the Garden of Gethsemane into the Old City. How, we wondered, will all the nations that are today aligned against Israel and eagerly waiting to “create” Palestine fit into this small place for judgment? Zechariah may have the answer:

Below is a list of scriptures (not exhaustive) in which God promises “all the land of Canaan” to Abraham, and then to Isaac, and then to Jacob; God promises to bring the people of Israel back to this land, which He repeatedly calls “their own land.”

Some of these passages will be read out in the European capitals where Christians are taking their stand today.

This is the point – the final Word: God says the land belongs exclusively to the Jewish people. God Almighty says it is their land. It makes no difference if every nation on earth says otherwise. It matters not if even the democratically elected government of Israel agrees to a “two-state solution” on this land, and wants to give part of it away.

Believers can and must stand on the Bible, and proclaim that, according to it, this is Israel’s land.

We must comfort and encourage the Jewish people by reminding them of God’s promise to be “a shelter for His people, and the strength of the children of Israel.”

And we must warn our nations that God will judge them in fury for dividing up the land – which He calls HIS OWN. (see, again, Joel 3).