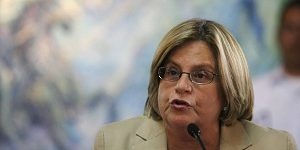 “We need a UN which will advance the noble goals for which it was founded,” Ros-Lehtinen said.  “Unfortunately, the current UN continues to be plagued by scandal, mismanagement, and inaction, and its agenda is frequently hijacked by rogue regimes which protect each other while targeting free democracies like the U.S. and Israel.  This bill is about making the UN work again.”

In order to give the U.S. and other member states the leverage needed to press for concrete reform, Ros-Lehtinen’s bill seeks to fundamentally change the way in which the UN is funded.  Currently, most UN activities (not including peacekeeping operations) are paid for through a general, all-purpose regular budget, funded through mandatory contributions from UN member states.   However, some organizations, including UNICEF and the UN High Commissioner for Refugees, are separately funded through voluntary contributions.  Ros-Lehtinen’s bill makes it U.S. policy to pursue shifting the UN regular budget to a voluntary basis (rather than the current assessed basis).  This change would allow the U.S. and other member states to choose what they fund at the UN, and what they do not.

“This legislation ends the era of no-strings-attached contributions, and gives us leverage to pressure the UN to finally make concrete reforms,” Ros-Lehtinen said.  “Making UN funding voluntary will give the U.S. control over how our contributions are spent at the UN.  Otherwise, U.S. taxpayer dollars will keep being spent on the bad, the ugly, and the indefensible, and there will continue to be no incentive for the UN to reform.”

The legislation also prohibits U.S. contributions to the United Nations Human Rights Council, the Goldstone Report, and the Durban process, and would cut off contributions to any UN entity which upgrades the status of the Palestinian mission to the UN.

“The Palestinian leadership’s current scheme to attain recognition of a Palestinian state at the UN without even recognizing Israel’s right to exist has been tried before, and it was stopped only when the U.S. made clear that it wouldn’t fund any UN entity that went along with it,” Ros-Lehtinen said.  “My bill similarly seeks to stop this dangerous scheme in its tracks.”

The bill contains other specific reform requirements, including a section mandating U.S. opposition to new or expanded peacekeeping missions until reforms are instituted, including the adoption of a universal code of conduct.  This provision may be waived by the President if needed for vital U.S. national security interests, or to prevent genocide or other widespread loss of human life.

NOTE: Ros-Lehtinen introduced the legislation with the support of 57 original co-sponsors.

BACKGROUND: The bill gives the UN two years after the bill’s enactment date to phase in funding reform before the U.S. is required to withhold funds.  However, after two years, should less than 80% of the UN regular budget be funded on a voluntary basis, then the U.S. shall, until the 80% threshold is met, withhold 50% of its non-voluntary regular budget contributions assessed by the UN.  This creates a sliding incentive scale, not an “all-or-nothing” sanction; the more the UN makes its regular budget voluntary, the less the U.S. would withhold.

WHAT YOU CAN DO:  Congresswoman Ros-Lehtinen needs support from her colleagues on this legislation in order for it to become law.  The Jewish community has mobilized in force to advance this initiative and now they are looking to their Christian friends.  These reforms are long overdue, and our elected officials in Washington need to hear from their constituents that they are not satisfied with the status quo.  Please contact your representative and urge them to back this reform.