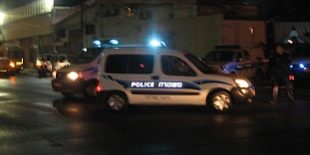 Seven people were injured in south Tel Aviv early Monday morning, when a terrorist from the West Bank carjacked a taxi and rammed it into a police road block protecting a Tel Aviv nightclub, before going on a stabbing spree.

Police said the terrorist, a 20-year-old Nablus resident, entered a taxi near the beginning of Salameh Street, and carjacked the driver, stabbing him in the hand. He then drove for approximately a kilometer down Salameh Street towards the Haoman 17 nightclub, which was filled with high school children at an end-of-summer party. At the time of the attack, almost all of the teenagers were inside the club.

Border Police had set up a road block ahead of time at the entrance to the club on Abarbanel Street, in Tel Aviv’s Florentine neighborhood. The terrorist rammed the road block, and struck a number of civilians and a Border Policeman.

“He then got out of the car, screamed Allahu akbar, and went on a knife attack,” a police spokeswoman said.

Of the seven people injured in the attack, five were Border Police officers and one was a security guard. One was seriously injured and two were moderately injured. The remainder were lightly injured.

A police source said that the road block prevented a far worse outcome.

Israel Radio reported that the attack was coordinated to strike a large youth party being held in the area.

The suspect was tackled to the ground by Border Police officers and taken into custody. He was taken to the Wolfson Medical Center in Holon in light condition.

Police Insp.-Gen. Yochanan Danino said Monday morning that over 1,000 teenagers were inside the club which was targeted. He said Border Police  preparations “were extraordinary and prevented a big disaster.”

Ben Hartman and JPost.com staff contributed to this report