Why is Glenn Beck going to Israel? 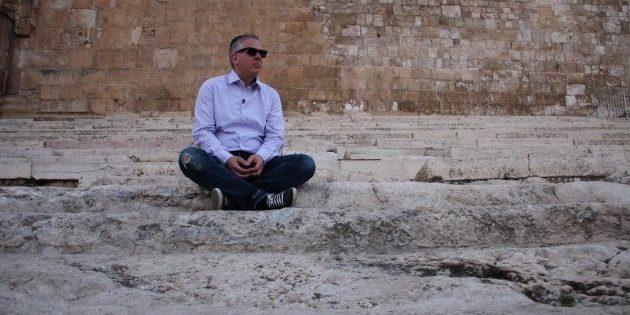 In its long slog through history, the Jewish caravan has acquired a lot of improbable and colorful camp followers, from Bulan, king of the Khazars, to Marilyn Monroe and Madonna. Lately, conservative commentator and former Fox News TV personality Glenn Beck has joined their ranks. This week, he’s setting up his tent in the Holy Land for three televised Zionist rallies, dubbed “Restoring Courage,” in Jerusalem and the ancient Mediterranean port city of Caesarea. They are a sequel to the mass Restoring Honor rally at the Lincoln Memorial a year ago.

Beck is traveling with letters of commendation from Jewish leaders such as Sen. Joseph I. Lieberman; conservative Christians such as the Rev. John Hagee, the head of Christians United for Israel; and Texas Gov. Rick Perry, a newly declared GOP presidential contender.

“These won’t be massive gatherings like the one in Washington last year,” Beck told me in a telephone interview. (Crowd estimates for that event ranged from 80,000 to more than 300,000.) “These will be ticketed events, specifically targeted at Christians around the world,” via the Internet.

In our interview, Beck said that the tour would be attended by “four presidential candidates, half a dozen to a dozen senators and about three dozen congressmen,” although he declined to name any of the participants. A few days later, Josh Rafael, his spokesman, called to say that, in fact, Beck wasn’t sure which high-ranking American politicians, if any, would be there. In any case, Beck doesn’t plan to share the lectern. This is his forum and, perhaps, his chance to make a bid for leadership of the growing Christian Zionist movement in the United States and around the world. Leading that movement could mean leading conservative Christians in this country as a whole.

This isn’t Beck’s first trip to the Holy Land. In July, he went to Jerusalem as the guest of a parliamentary committee and proclaimed his identification with Israel by paraphrasing the Biblical Book of Ruth: “Where you go, I will go. Where you lodge, I will lodge. Your people are my people. Your G0d is my G0d.”

Such fervent philo-Semitic rhetoric is rare, even among the United States’ Christian Zionists, a group whose operational alliance with Israel dates at least to the days of my former boss, Israeli prime minister Menachem Begin. Jimmy Carter was in the White House and he had a palpable distaste, even then, for Israel. At the same time, rising evangelical leaders such as Jerry Falwell and Pat Robertson were making support for Israel and its policies a pillar of their Christian Republican philosophy. Begin asked his staff how many of these evangelicals there were in the Unites States. The answer was upward of 20 million. And that settled that.

American Jewish leaders, virtually all of whom were (and are) liberal Democrats, were (and remain) scandalized. They argued that evangelical Christians believe that Jews don’t go to heaven and that they will die in some end-of the-world scenario. Begin — and every subsequent Israeli prime minister of both the left and the right — preferred to let God sort out eternity. Here on Earth, actions speak louder than words.

The Christian right has no obvious political motivation for its Zionism. Republicans are not going to get American Jewish votes or much in the way of contributions. So what makes them love Israel?

“Many Christians support Israel for the same reason other Americans do,” I was told by Rabbi Yechiel Eckstein, the founder of the International Fellowship of Christians and Jews. “They see Israel as a pro-American democracy in a region of anti-American dictatorships. Or they think that after the Holocaust, supporting Israel is the moral thing to do. But the main motivator for evangelicals is the Bible, Genesis 12:3. ‘I will bless those who bless Israel and curse those who curse Israel.’ ” If you believe that literally, standing up for Israel isn’t just a political preference but a divine commandment.

The fervor gap is reflected in public opinion polls. Support for Israel is a rare matter of bipartisan agreement in the United States, a fact demonstrated recently when Prime Minister Benjamin Netanyahu, during a public spat with the Obama administration, got a wildly enthusiastic reception from both Democrats and Republicans in Congress. A Gallup poll released in late February showed that 63 percent of Americans sympathized more with the Israelis, compared with 17 percent with the Palestinians. But it is also true that Democrats are less enthusiastic than Republicans. That might seem counterintuitive; Jews, after all, are the very heart of the Democratic Party. And, indeed, 57 percent of Democrats prefer Israel to the Palestinians. But 80 percent of Republicans do.

Evangelicals express their support not only at the polls, but with their pocketbooks. The International Fellowship of Christians and Jews raises $120 million a year for Jewish philanthropy from more than a million born-again donors. Eckstein estimates that other American evangelical organizations, including Christians United for Israel, send an additional $20 million, much of it to strengthen Jewish settlement of the West Bank and East Jerusalem.

Not all Israeli politicians are pleased. The Westernized intelligentsia is conventionally embarrassed by the born-again embrace, while some ultra-orthodox rabbis regard Christian Zionism as a missionizing trick to steal Jewish souls. And Beck told me that he has no plan to meet with Israeli national leaders because he doesn’t want “to put them in an awkward position” vis-a-vis the White House. But the great majority of Israelis are more than willing to accept a stranger who comes bearing unequivocal support. Nor will Israelis miss the contrast with the Obama administration’s approach.

In May, after the president delivered what was putatively a pro-Israel speech to the annual conference of the American Israel Public Affairs Committee, a Smith poll showed that only 12 percent of Israelis consider the U.S. president pro-Israel, while 40 percent said he was pro-Palestinian. Obama would argue that it is possible to be both, and many liberal Jews agree. But Beck and his fellow Republicans, especially evangelicals, do not believe that the Arab-Israeli conflict calls for evenhandedness. “This is a simple matter of good and evil,” he told me.

While Beck, who is a Mormon, certainly accepts the biblical rationale for blessing Israel, he adds his own history-based “never again” form of activism. Next month, the U.N. General Assembly is likely to exercise its automatic anti-Israeli majority to declare a Palestinian state, an act of political theater aimed squarely at the legitimacy of the Jewish state. The United Nations also is holding another World Conference Against Racism, whose record of open anti-Semitism has prompted the United States, Canada and many European democracies to boycott it. Beck has timed his rallies to push back against these U.N. events, which he considers symptoms of an old malady. At a recent convention in Washington of Christians United for Israel, he electrified the crowd by declaring that, when the time comes to get the Jews, “count me as one, and count me first.”

Glenn Beck’s sojourn in Israel is not likely to stir much excitement on the streets of Jerusalem or Caesaria. The country is engaged in a round of social upheaval centering on the high cost of living and, in any event, Israelis don’t need a reminder that the United Nations is fixed or that Israel is the target of an international jihad. But Beck’s real audience is, as he says, the United States’ Christian evangelicals.

Beck is not a minister of the gospel. (Some evangelicals even dispute that Mormons are Christians.) But he burns with the fire and ambition of a television evangelist. The old lions of the Christian right such as Falwell and Robertson are gone or going. The Rev. Hagee is past 70 and has had heart trouble. Beck is still in his 40s, and since leaving Fox News he is at loose ends. At the Christians United for Israel conference, he announced that he was joining the organization. Could a Mormon someday become the next great leader of the Christian right? If that is his goal, Beck’s best shot may come via Christian Zionism, and the journey begins this week in Jerusalem.