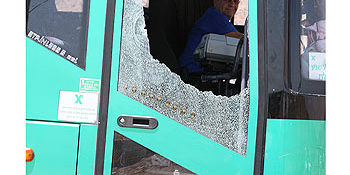 When Arab terrorists chalk up their day’s “victory” against Israeli civilians they will be able to count two young children, ages 4 and 7, among Thursday’s wounded. Two people died in the attacks against Egged Bus # 392 from Mitzpe Ramon to Eilat along with a following second bus. Four others were killed when a vehicle ran over a roadside bomb planted to maximize damage as IDF soldiers raced to the scene to defend and assist those who were hurt in the attacks.

The little ones were among the 33 Israelis initially taken to Eilat’s small local Yoseftal Medical Center — the closest hospital — following the quadruple terrorist attack in Israel’s southern region. Seven of the most severely wounded were later airlifted to Be’er Sheva’s Soroka Medical Center.

Israel has meanwhile taken the nation to its highest terror alert following the attacks, which took place along its border with Egypt’s Sinai Peninsula. The terrorists apparently used automatic, anti-tank weapons, mortars and roadside bombs in the attacks that targeted two Israeli buses and civilians.

All non-Palestinian Authority Arab United Nations personnel have allegedly been evacuated from Gaza due to fears that Israel will retaliate for the attack. Egypt reportedly has also closed the Rafiah crossing with Gaza.

Analysts speculate that the international Al Qaeda terrorist organization may have been involved in the multi-site operation due to its complexity and the fact that Egypt recently began to crack down on Bedouin and terrorist activities in the Sinai Peninsula, where the organization has developed training bases. The region has become a lawless territory since the fall of former President Hosni Mubarak during the Tahrir Square Revolution that swept the country earlier this year. When Arabs fight each other they invariably then attack the Jewish state in order to prove who is more anti-Israel.

“It is unbelievable — the fence is several yards from the highway and when we were there on a field trip we saw a lone Egyptian guard in a tower, really less than 100 yards from the road,” said an American tourist who spoke with Arutz Sheva Thursday afternoon following the attacks.

The source, who requested anonymity, was blunt. “There is no problem to attack the highway from the Egyptian side, even with an M-16 rifle, let alone with a missile,” he added.