Origins of the Arab People 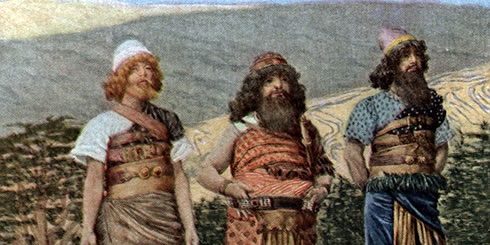 THE ARABS IN PROPHECY, PART 3 OF 5
BY DR RICHARD BOOKER—

These forefathers of the Arab people rejected their covenant God and covenant blessings. They despised their spiritual inheritance. This was epitomized when Esau traded his priestly birthright to Jacob. That attitude was passed down to his descendants. One family line stayed true to the covenant God while the other did not. The Ishmael family line worshipped false gods which is why the hatred between the Jews and the Arab Muslims is theological in nature. This is why the God of the Bible is not the same as the god of the Koran. The God of Abraham, Isaac and Jacob is not the same as the god of Ishmael, Esau and Lot. The God of Moses and Jesus is not the god of Mohammed.

We learn from the Hebrew Bible and from secular history that animosity has continued between the two groups of family members from generation to generation. We learn also that because of their thirst for blood, God would judge the Arabs by giving them a history of violence and bloodshed which finds its religious expression in Islam.

The prophecy is found in Ezekiel and reads as follows: “Because you have had an ancient hatred, and have shed the blood of the children of Israel by the power of the sword at the time of their calamity, when their iniquity came to an end, therefore, as I live says the Lord God, I will prepare you for blood, and blood shall pursue you; since you have not hated blood, therefore blood shall pursue you” (Ezekiel 35:5-6).

Because of their hatred of God’s chosen people, the LORD pronounces curses on the descendants of Ammon, Moab and Edom, as well as other nations in the Middle East that seek to destroy the people of God. (See Ezekiel 25-30).

Psalm 83 clearly reveals the attitudes and purposes of the descendants of Ishmael and Esau (the Arab countries of our time) regarding their cousins, the present day descendants of Isaac and Jacob, who now make up the modern nation of Israel.

This alarming Scripture sounds strangely familiar to the covenant made by Muslim terrorists groups and the Arab nations concerning Israel. It is a prophecy of the end times regarding the Arabs. It reads as follows:

“… Come, and let us cut them (Israel) off from being a nation, that the name of Israel may be remembered no more. For they have consulted together with one consent; they form a confederacy against You (God): who said, Let us take for ourselves the pastures of God for a possession” (Psalm 83:4-5, 12).

House of Peace – House of War

The Arab-Israeli conflict is more than a family feud. It is a religious or spiritual battle. Islam cannot accept Israel as a neighbor because of the Islamic concept of relations between neighbors.

Because the land of Israel was, at various times, ruled by Islam, Muslims feel that it must be recovered for the glory of Allah. This is the heart of the Arab-Israeli-Palestinian conflict.

In Islamic tradition, Allah’s kingdom will not be established until the Muslims kill all the Jews and/or subject them to Muslim rule. The same attitude exists towards Christianity. This is why Muslim religious leaders incite mobs to murder in the name of Allah. When a Muslim kills a Jew, he shouts, “Allah Akbhar,” meaning, “Allah is Great.”

The Islamic “holy war” is aimed at Christians as well as Jews. They also shout, “Today we kill the Saturday people (Jews), and tomorrow we kill the Sunday people (Christians.) This means that they first intend to destroy Israel and then establish Islamic rule over all that nations that have a Judeo-Christian history.

Failing to understand the nature of this conflict, the Western media paints Israel as unreasonable and stubborn. If only Israel would relinquish the West Bank to the PLO for the purpose of establishing a Palestinian state, there would be peace. It is terrible naïve for leaders of the West to think that such a concession would ever enable Israel and the Arab Islamic nations to settle their differences. The Arab nations will never agree to a real peace as long as “one inch” of territory is in Israeli hands and out of control of Allah.

The PLO, Hamas, and the other terrorist organizations have stated that the establishment of a Palestinian state is just the first stage of its plan to destroy Israel and recapture the territory for the glory of Allah. In fact, a Palestinian state has already been established. It is called, Jordan.

Westerners, unaware of the religious and political history of these nations, are easily confused. However, Israel and the Arab Islamic countries understand perfectly what is at stake.

In our next article we will learn the modern version of this ancient hatred of the Jewish people as we answer the question, “Who are the Palestinians?”

‘We don’t know if rotation will happen’ says FM amid political tension
October 5, 2020