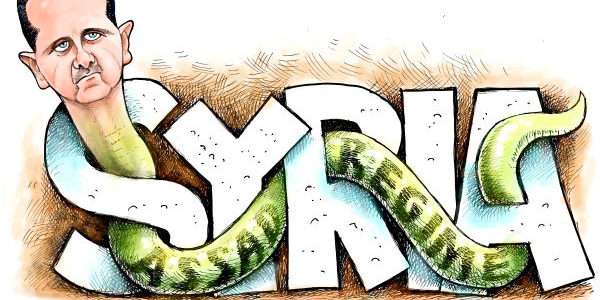 BY ARIEH O’SULLIVAN, THE MEDIA LINE—

Diplomatic momentum is building on the Bashar Assad regime as it ratchets up its four-month military crackdown, but the Syrian president shows no signs of being in the mood to listen, analysts say.

“Whether he is in a mood to listen or not doesn’t matter. Everyone else is in a mood for a post-Assad Syria and are all positioning themselves for this eventuality,” Prof. Abdulkhaleq Abdulla, a political scientist at UAE University, told The Media Line.

Three Gulf states countries have withdrawn their ambassadors from Damascus, including Bahrain, Kuwait and most significantly Saudi Arabia. In a major test for Turkey, Anakra has dispatched its foreign minister to Damascus on a mission to stop the violence.

Notwithstanding the vicious crackdown on Syrians demanding reform that has killed over 2,000 people, neighboring states are playing out their regional rivalries on Syrian soil for greater influence on the day after.

The Alawites and Baath party have dominated Syrian politics for four decades. Assad is really battling for his life and the current Syrian way of life. If he goes, the Alawite minority control goes with him and quite possibly the army would collapse.

Economically, Syria is going down the tubes. So far its oil fields haven’t been targeted by the rebels and are continuing to pump out nearly 400,000 barrels a day. While it is low-grade and its supply is not expected to last much longer, it still accounts for almost 30% of Syrian state revenue and its importance is growing considering how the major tourism industry has collapsed.

Syria is dependent on European refineries to process its heavy crude oil. Anti-Assad activists are pushing for Europe to impose sanctions on Syrian oil. For now, Russia is against sanctions, not just out of a sense of obligation to its once close ally, but because it wouldn’t want to see Syria fall into American or Western influence.

A decade ago, Syria and Turkey were close to war. Today, Syria is one of Turkey’s greatest trading partners. Gallia Lindenstrauss, a researcher at the Institute for National Security Studies in Tel Aviv, believes that the Turks probably hold the most sway with Assad’s regime at the moment.

If he is in a mood, he will listen to the Turks,” Lindenstrauss told The Media Line. “He saw what happened in Egypt and to the other dictators. He knows if he goes through with reforms he will be endangering his life.”

On the other hand, some of Assad’s options include lowering the violence to a level that would make it more difficult for the international community to impose sanctions or intervene militarily,” said Lindenstrauss.

The Turks are also concerned with refugees flooding its borders. They don’t want a repeat of 1991 when Iraqi refugees massed on the border and an international no-fly zone was created to protect them from Saddam Hussein’s forces. Ultimately, this created a de-facto Kurdish state.

The geopolitical earth tremor taking place in Syria could also be seen as part of the greater conflict between the Arab world and Iran, manifested in a Sunni-Shi’ite clash.

“There is no doubt about it that Iran is going to be one of the biggest losers,” Abdulla of UAE University said. “If you look at who lost and gained from this Arab Spring, Iran has come out with a net loss so far. If Assad goes that will be their biggest loss. The Iranians are doing everything possible to bolster him.”

In many ways, Iran holds the key for Assad with its strong support. Iran has been reportedly aiding the Assad regime with know-how and advice. Tehran is also reportedly considering a $5 billion aid package to Syria as a bail out if sanctions are imposed.

Dramatic moves out of Damascus have already occurred. Assad fired his minister of defense on Monday and by Tuesday the man, Gen. Ali Habib, was reported to have been found dead at his home. Habib, according to Asharq al-Awsat, had been one of Assad’s greatest opponents to the bloody military crackdown in Hama.

Speculation has also risen that because Habib was from Assad’s Alawite sect, the split between them may have been part of an unsuccessful internal power struggle get rid of Assad.

“It is not the outside world that is going bring Assad down but the people on the ground there,” Abdulla said. “You have watch for two things: when Damascus will begin to rise — They are turning against him, but are waiting it out — and the trouble within the military. We have seen signs of this already when he sacked his defense minister. Things are starting to happen.”

Lindenstrauss said she was doubtful whether the situation in Syria would drag Turkey and Iran into direct confrontation, but that the lack of stability there was bound to create friction.

With diplomatic pressure from the Arab world and the West mounting, eyes are on Iran to see how it reacts. Meanwhile, Syrian forces persist with its offensive against demonstrators in several towns on the border with Turkey.

“Dictators don’t give up easy. They are fighting back and using brutal force at their disposal to prevent revolts. Tunisia was the exception. All the others are acting in a way one should expect toward revolutions. They are bloody and prolonged and not easy to overthrow, especially ones like Assad and (Libyan leader Muamar) Gaddafi who understand the use of force,” Abdulla said.

Category: Syria and LebanonBy The Jerusalem ConnectionAugust 10, 2011Leave a comment