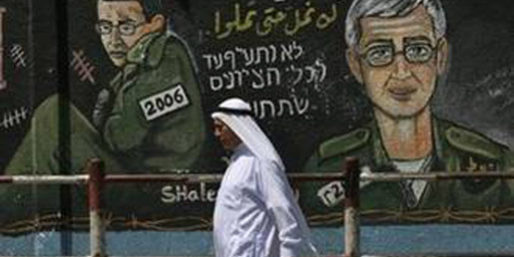 A senior member of Hamas said Sunday that kidnapped Israeli soldier Gilad Shalit is being held by Hamas terrorists under good conditions.

Sheik Hassan Yousef, a Hamas founder and one of its top operatives in Judea and Samaria who helped plan many of the terrorist group’s attacks in the region and who was released from an Israeli prison last Thursday due to crowdedness, made the comments in an interview he gave to Israel’s Channel 2 News.

“Shalit is in good condition,” he said. “He is being held under good conditions and if he is released soon, if a prisoner swap is made, Shalit would tell you about the human side, about the personal treatment, and about the good living conditions he received.”

Yousef also revealed that Hamas prisoners had met with senior Israeli officials in prison to discuss the possibility of reaching a prisoner swap deal to free Shalit.

“There was more than one meeting between us and the relevant Israeli officials on the Shalit issue,” he said.

Yousef, whose son Mosab was revealed last year to be a former spy for the Mossad, added that he believes that ultimately, Hamas and Israel will have no choice but to talk with one another.

“If Hamas wins the support of the Palestinian people there may be dialogue ,” he said. “The most difficult of dialogues take place between enemies. There’s no choice other than to ultimately hold dialogue between us.”

He added, however, that “Hamas today is not a replacement for the Palestinian Authority and is not responsible for negotiations.”

Last week, Hamas claimed on one of its websites that Shalit, held captive by terrorists for more than five years, is receiving good treatment from his captors but is fasting during the holy month of Ramadan.

The group claimed that Shalit is “embarrassed to ask for food during Ramadan despite the fact that his captors do not deny him that right.”