'Lebanon army says it can defend oil reserves without Hezbollah' 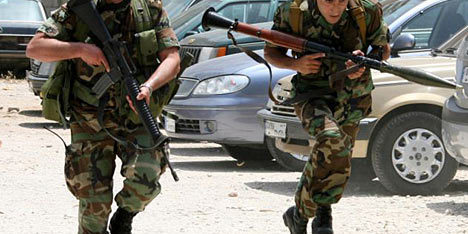 “The Lebanese Army, not you, will deal with our oil installations in the event they were exposed to risk,” Geagea told a news conference, according to the report.

Nasrallah warned Israel on Tuesday against trying to steal Lebanon’s maritime resources and said it would retaliate against any Israeli attack on the country’s oil and gas installations, in light of a dispute building between Israel and Lebanon over their maritime border and huge natural gas and oil reserves beneath the Mediterranean Sea.

The countries are longtime enemies and do not have diplomatic relations.

According to the Daily Star report, Geagea accused Hezbollah of “usurping the state.”

Geagea said that despite political disagreements with the March 8 Alliance oppositional group – of which Hezbollah is a member – “We stand behind the government on the issue of the oil wealth.”

According to the report, Geagea slammed Nasrallah for stepping over the line of his authority, saying Nasrallah is not entitled to look after the Lebanese peoples’ rights, and that there are Lebanese institutions in place to fulfill on that role. He stressed that the Hezbollah leader knew what he was doing and acted as he did “because he considers himself to be the ruler of Lebanon.”

Geagea, however, said Nasrallah’s acts were “rejected because the rules of Lebanon are the Constitutional institutions,” said the report.

The Daily Star also reported that Future Movement MP Hadi Hobeish voiced a similar position to that of Geagea, saying “Who asked you to set out a strategy, rather than the Lebanese state, under the pretext of protecting maritime resources?”