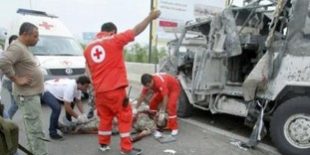 The bombing of a UNIFIL convoy in southern Lebanon on Tuesday night was likely aimed at sending a message to the peacekeeping force to scale back its operations against Hezbollah, Israeli defense officials said on Wednesday.

UNIFIL’s mandate is up for renewal in mid-August and the attack is understood in Israel as a sign of Hezbollah concern that the force is looking to bolster its rules of engagement.

Six officers from the French contingent were wounded when an explosion targeted a convoy of four trucks traveling near the southern Lebanese town of Sidon. In May, a similar bomb attack took place wounding six soldiers from the Italian contingent just a few kilometers from the scene of Tuesday night’s attack.

Israel has been lobbying diplomats from countries which contribute to UNIFIL – particularly Spain, Italy and France – to get the UN to issue new rules of engagement for the peacekeeping force that will enable it to search Lebanese villages without prior coordination with the Lebanese Armed Forces (LAF).

According to UNIFIL’s current rules of engagement, the force is not allowed to enter southern Lebanese villages to search for Hezbollah arms caches unless it coordinates the operation with the LAF. If approved by the UN, the new rules would still need to be approved by the Lebanese government.

On Wednesday, UNIFIL announced that it was working with the LAF to investigate the bombing. The peacekeeping force also said that it would review its security arrangements in wake of the bombing.

“Security and safety of UNIFIL personnel and installations is of paramount importance,” the force said in a statement. “The Mission already has in place comprehensive security and protective arrangements, which are regularly reviewed and risk mitigating measures applied while ensuring mandate implementation.”