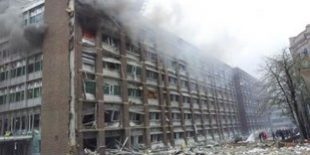 Europe’s fringe right-wing extremists present a real danger to society. But Oslo’s devastating tragedy should not be allowed to be manipulated by those who would cover up the abject failure of multiculturalism.

The cold-blooded calculation of the Norway tragedy boggles the mind. For over an hour, Anders Behring Breivik, 32, dressed as a police officer and armed with a rifle and a hand gun, prowled Utoeya, a tiny forested holiday island a few dozen kilometers from Oslo, calmly massacring teenagers.

The youngsters had been attending the annual summer camp for the youth wing of Norway’s ruling Labor party.

With no one armed to confront Breivik, escape from the island by water was the only avenue to safety.

When he finally was forced to put down his weapons by a police team that reportedly took 40 minutes to respond, at least 86 were dead and many more were wounded.

Just hours before Breivik, a former member of a populist anti-immigration party who wrote blogs attacking multiculturalism and Islam, had detonated a bomb in Oslo’s government district that killed seven.

The attacks, which targeted a government known for its embrace of multiculturalist policies, are being billed as the worst incident of bloodshed on Norwegian soil since World War II.

As Israelis, a people that is sadly all too familiar with the horrors of indiscriminate, murderous terrorism, our hearts go out with empathy to the Norwegian people, who perhaps more than any other nation symbolize the unswerving – and sometimes naïve – pursuit of peace.

Oslo is the namesake of one of the most ambitious – and misguided – attempts by Israel, under the mediation of the Norwegians, to reach a peace accord with our Palestinian neighbors.

Norway’s capital is where the Nobel Peace Prize is presented annually. And though Norway has troops in Afghanistan to bolster the allied forces there, the basically peaceful nature of Norwegians goes a long way to explaining the utter shock that has gripped the nation in the wake of the tragedy and the blatant incongruity of the conspicuous deployment of security forces in city centers to safeguard citizens.

Now along with their dogged pursuit of peace, the Norwegians are also coming to grips with the reality of evil in their midst. It would be wrongheaded, however, to allow the fact that this terrible tragedy was perpetrated by a right-wing extremist to detract attention from the underlying problems faced not only by Norway, but by many Western European nations.

Undoubtedly, there will be those – particularly on the Left – who will extrapolate out from Breivik’s horrific act that the real danger facing contemporary Europe is rightwing extremism and that criticism of multiculturalism is nothing more than so much Islamophobia.

While it is still too early to determine definitively Breivik’s precise motives, it could very well be that the attack was more pernicious – and more widespread – than the isolated act of a lunatic. Perhaps Brievik’s inexcusable act of vicious terror should serve not only as a warning that there may be more elements on the extreme Right willing to use violence to further their goals, but also as an opportunity to seriously reevaluate policies for immigrant integration in Norway and elsewhere. While there is absolutely no justification for the sort of heinous act perpetrated this weekend in Norway, discontent with multiculturalism’s failure must not be delegitimatized or mistakenly portrayed as an opinion held by only the most extremist elements of the Right.

Britain’s Prime Minister David Cameron and Germany’s Chancellor Angela Merkel have both recently lamented the “failure of multiculturalism” in their respective countries.

Amartya Sen, the 1998 Nobel Prize laureate for welfare economics from India, has noted how terribly impractical it is to believe that the coexistence of an array of cultures in close proximity will lead to peace. Without a shared cultural foundation, no meaningful communication among diverse groups is possible, Sen has argued.

Norway, a country so oriented toward promoting peace, where the Muslim population is forecast to increase from 3 percent to 6.5% of the population by 2030, should heed Sen’s incisive analysis.

The challenge for Norway in particular and for Europe as a whole, where the Muslim population is expected to account for 8% of the population by 2030 according to a Pew Research Center, is to strike the right balance. Fostering an open society untainted by xenophobia or racism should go hand in hand with protection of unique European culture and values.

Europe’s fringe right-wing extremists present a real danger to society. But Oslo’s devastating tragedy should not be allowed to be manipulated by those who would cover up the abject failure of multiculturalism.