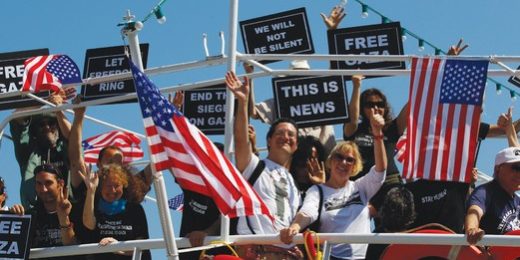 From Boston Harbor to the jail cells of Birmingham to the public squares of Cairo, the American people have had a centuries-old love affair with the idea of regular citizens engaging in civil disobedience to bring down unjust laws, discriminatory policies and brutal regimes, through non-violent protests.  It comes as no surprise, then, that a small group of Americans were involved in raising funds, outfitting ships and serving as crew and passengers on the boats for the flotilla that intended to breach Israel’s maritime blockade of the Gaza Strip.

Tragically, rather than engaging in authentic efforts to win freedom for an oppressed people, or acting to safeguard the liberties of an endangered minority, these Americans, wittingly or unwittingly, are lending material support and providing resources to Hamas and its goal of eradicating the Jewish state.  If imperiling the security of innocent Israelis weren’t enough, Hamas’s “useful Americans” are also violating numerous federal laws and recklessly endangering their own lives.

Pursuant to the Oslo Accords negotiated and signed between Israel and the PLO, the Palestinians agreed that the Gaza coastline would be placed under Israeli control and that no foreign ships would be allowed closer than 12 nautical miles from the shore.  Israel demanded this out of concern over widespread import of conventional and unconventional weapons into Gaza.  Had it not been for this provision, there would be no Palestinian Authority today, and Israel would not have withdrawn from Gaza.

Because of this agreement, the Gaza maritime blockade is consistent with international law, and violating it constitutes a hostile action against the State of Israel.  As such, Israel is permitted to utilize all necessary force to repel any seafaring intruders.

The UN’s soon-to-be-released Palmer Report, which investigated last year’s flotilla, will confirm that this is true.

THE AMERICANS who organized the boats seemingly refuse to accept the validity of Israeli jurisdiction over the coastline and are determined to dangerously confront the Israel Navy and reach Gaza.

Ironically, those organizing and outfitting the ships, who claim that Israel is in violation of international law and Palestinian rights, have themselves run roughshod over numerous provisions of the federal penal code as they attempt to deliver material support and resources to the Hamas government, which is responsible for thousands of missile attacks on Israeli cities.

The Neutrality Act, legislated in 1789, prohibits American citizens from organizing or donating funds or participating in any military or naval expedition against an allied foreign nation.  Although originally passed by Congress as an anti-piracy statute, its ancient provisions remain in force today.  Related sections of the federal criminal code outlaw the furnishing of a sea vessel with the intent that it be employed to commit hostilities against a people with which the United States is at peace.  The organizers of the Gaza flotilla have ignored these laws, as they openly raised funds via websites and public appeals.

Delivering goods and other cargo by ship to the Hamas government in Gaza, without the supervision of the Israeli army, would also constitute a violation of the American federal code.  The Anti Terrorism Act of 2002 prohibits the provision of any material support or resources to a designated terrorist organization.

A recent US Supreme Court decision ruled that material support could be something as benign as legal advice and would certainly include weapons, funds or bunker-building supplies.  If anyone were killed, as nine were last year, the organizers could be charged with murder.

These laws were enacted to ensure that US citizens would not engage in hostile campaigns against American allies lest the US be dragged deeper into foreign conflicts.

Moreover, they serve to ensure that terrorist organizations are not funded or supplied by American citizens or residents.

When these laws go unenforced because of some romanticized notion that the lawbreakers are modern-day Gandhis, Kings and Mandelas, they imperil not just innocent Israelis who bear the brunt of the murderous Hamas attacks, but the safety of all peoples in the region.

The residents of the Negev communities have suffered more than a decade of deadly missile attacks from Gaza.  The unsupervised provision of materials or support to Hamas endangers their safety.

Peace treaties, to which the United States government served as an active intermediary, cannot be ignored.  It is wholly negligent of the US Department of Justice not to have investigated and prosecuted the flotilla organizers.  Israel’s citizens cannot accept that American law enforcement is turning a blind eye and providing safe harbor to those who would abet their destruction.

The best way to head off the next flotilla is to pursue legal proceedings against its organizers.  It is up to the law enforcement agencies around the world to make sure that laws are followed.

The writer is an Israeli attorney and the director of Shurat HaDin – Israel Law Center.

Red Alert: Not just the rise, but the acceptance of antisemitism—what can we do about it?
May 18, 2022
Glory or weakness?
March 22, 2022
Germany loosens asylum requirements for Ukrainian Jews amid ongoing war with Russia
March 10, 2022
Iranian media slanders Zelensky with antisemitic article
March 10, 2022
Gaslighting Anti-Semitism in America
January 24, 2022
Red Alert: Colleyville Texas: Why Is it Our Problem?
January 19, 2022