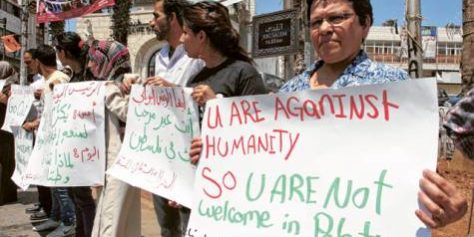 The recent attempts by anti-Israel extremists to break Israel’s naval blockage of Gaza and to flood Israel’s airports with troublemakers have failed.

The ships of fools, knaves hypocrites, bigots, and supporters of terrorism that tried to sail from Greece have now apparently been run aground. Most of the hard-left extremists have gone home following a decision by the Greek government to prevent the boats from leaving Greek ports. And those who tried to flood Israel’s airports are being deported. The resulting fiasco, which was designed to discredit Israel, has succeeded only in discrediting the Israel bashers on the boats and planes by exposing their true purpose.

The alleged purpose of the ships was to feed the starving Arabs of Gaza. The problem is that the Arabs of Gaza are not starving. Nor are they in need of outside help.

According to reporting by The New York Times, Gaza has been thriving recently. Luxury hotels are being built; stores are stocked with food; beaches are filled with children; and life is far better than in neighboring Al Arish, which is across the border in Egypt.

In fact, according to news reports, the residents of Gaza are far better off than the residents of many Arab areas in the Middle East. Medical care is better, infant mortality is lower, longevity is higher, employment is increasing, cars are plentiful, food is more available and the quality of water and air is higher. The Gross National Product has risen dramatically over the past year.

To be sure, the citizens of Gaza do not have freedom of speech, freedom of religion, freedom of the press, the right to dissent or the ability to join political parties that are out of favor.

These limitations are the fault of Hamas, not of Israel.

Indeed, the only Arabs in the region whose lives, in every respect, are better than those who live in Gaza, are the citizens of the West Bank, which is controlled by the Palestinian Authority rather than Hamas.

So if the fools on the ships were really interested in helping Arabs who are truly in need of food, medicine and other provisions, they would set sail for ports in Egypt, Syria, Lebanon and other areas of the Middle East. But these hypocrites have no interest in helping the downtrodden. Their only interest is in delegitimizing the Jewish state of Israel.

Most of these “human rights activists” have no history of supporting human rights elsewhere in the world and many have records of supporting the worst abusers of human rights. The list of those on the boats is a dishonor role of human wrongs, blatant hypocrisy, and double standards.

A common virus among many on these ships is a hatred for Jews, the Jewish state, America, and the West. Some are self-haters, because they themselves are Jews, Israelis or Westerners. Others are Arabs who cannot abide the notion of the Jewish state, regardless of its size or borders, anywhere in the Middle East.

I am aware of none who applies a single standard of human rights to all countries in the world and prioritizes his or her activities in order of the seriousness of the human rights violations.

These sea and air efforts to delegitimize Israel by applying a double standard to its actions have failed. There will be others. They will include efforts to incite mobs to cross the border into Israel through Syria, Lebanon, and Jordan. The goal will be to provoke Israel into overreaction. Every government in the world has the right to prevent the law violators from illegally entering their country, but only Israel is condemned for its efforts to do so.

There will also be efforts in September to use the machinery of the United Nations, most particularly of the General Assembly, to delegitimize Israel. These efforts will include a vote to recognize the Palestinian state without requiring the Palestinians to sit down and try to negotiate a real peace with Israel.

It will also include efforts by the notorious Human Rights Council of the United Nations to condemn Israel for virtually everything it’s done since it came into existence 63 years ago. None of these will succeed but they will encourage Israel’s enemies to become even more intransigent, while at the same time discouraging them from making the kinds of compromises that Israel is willing to make in the interest of peace.

When a proper standard is universally applied, Israel’s record on human rights shines in comparison with the records of nations and groups supported by the fools and hypocrites on these boats and planes.

The writer’s latest book is a novel, The Trials of Zion. A shorter version of this article appeared in Newsmax on July 10, 2011.