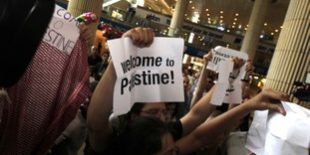 Pro-Palestinian activists plan to hold protest events across the West Bank this week, starting in the Aida refugee camp north of Bethlehem on Sunday and ending in Jerusalem on Friday.

It’s the second phase of the “Welcome to Palestine” campaign, in which foreign activists flew to Ben-Gurion Airport on Friday from across Europe, in an event dubbed the “flightilla.”

They wanted to protest the government’s practice of barring such activists from entering the country and to take a stand in support of Palestinian statehood.

In advance of Friday’s event, the Interior Ministry sent lists of hundreds of activists to airlines across Europe.

As a result, around 200 of them were denied boarding at European airports, Public Security Minister Yitzhak Aharonovitch said.

Activists, however, say the number of people prevented from flying to Israel is higher, and could be anywhere from 300 to 500.

The 124 activists who landed at Ben-Gurion Airport on Friday were detained after they informed the officials at passport control that they were heading to the Palestinian territories.

As of Saturday night, the activists, who are housed at Givon prison in Ramle and the Ela prison in Beersheba, were awaiting deportation.

The group, made up of 76 women and 48 men, include people from the US, Spain, Belgium, France and the Netherlands.

Activists said that 50 to 100 of their comrades made it through passport control and into the country.

An attorney from the Al-Damir Association for Human Rights, and NGO protecting prisoner’s rights, spoke with some of the activists in Ramle on Saturday, as part of legal appeal on their behalf against the deportations.

Police and the Interior Ministry expressed satisfaction after stopping hundreds of activists suspected of planning disturbances from entering the country.

Police had mobilized hundreds of undercover and uniformed officers at Ben-Gurion Airport to meet any activists who might have circumvented the no-entry bans.

Very few Israeli activists came to the airport to greet the international arrivals. They entered the airport by pretending to be meeting legitimate passengers.

Once in the Terminal 3 arrivals hall, they held up signs that said, “Welcome to Palestine” and shouted slogans.

Police and hecklers immediately surrounded them. Police took away six of the Israeli activists in a van, arresting three of them. Jerusalem Post reporter Larry Derfner was shoved into the van by mistake, but was immediately released when he showed his press card.

But most of the attention of security personnel both in Israel and in the European airports was on the incoming flights, a number of which were delayed as a result of the extra measures.

The security operation reached its peak on Friday afternoon, when two passenger aircrafts, an EasyJet plane that flew in from Geneva, and an Alitalia plane from Rome, were diverted to Terminal 1 and met by police.

Officers checked each passenger to identify activists, sending ordinary passengers to customs at Terminal 3, and taking activists into custody for questioning.

At Paris’s Charles de Gaulle Airport, 50 pro-Palestinian activists arrived at the Lufthansa terminal hoping to board a flight to Israel, and then refused to leave after they were banned from boarding the aircraft, Israel Radio reported.

Olivia Zemour, leader of the EuroPalestine organization that was one of the organizers of the “air flotilla,” said the no-entry list had 347 names on it.

“Charles de Gaulle Airport is under Israeli occupation. We are peaceful people and have no interest in causing disorder at Ben-Gurion Airport,” Zemour was quoted by Israel Radio as saying.

In Geneva, EasyJet refused to let 30 activists board a flight to Israel.

“The presence of undercover and overt forces at the airport has prevented many who sought to disturb public order from heading ,” Aharonovitch said on Friday.

“Police also mobilized extra forces at the Temple Mount and along the Green Line to prevent any disturbances.”

Interior Minister Eli Yishai praised the Immigration and Population Authority for its role in identifying activists and preventing their arrival.

Separately, in the West Bank on Saturday, Palestinians protested in Bil’in and Kalandiya to mark the anniversary of the 2004 advisory ruling on the West Bank security barrier by the International Court of Justice at The Hague.

It stated that the barrier was illegal under international law and that Israel’s presence in the West Bank met the definition of an “occupation.”