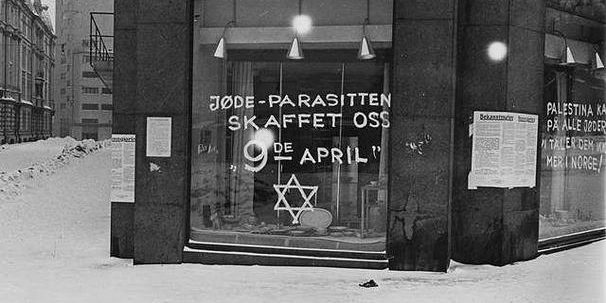 In the past few years, foreign interest in the widespread anti-Israelism among the Norwegian elite and the corresponding anti-Semitism in Norwegian society have increased. Up until last month, there were no official statistics to back this information up.

This enabled the Norwegian government and media to deny the hate-inciting reality, while trying to demonize those who dared to tell the truth.

Last month’s publication of a study ordered by the Oslo municipality on racism and anti-Semitism among students of the 8th through 10th grades in the town’s schools came as a shock. The study found that 33 percent of the Jewish students regularly experience bullying at school. According to the definition used, this means that at least two or three incidents of verbal or physical abuse target these Jewish students per month.

It would be hard to find similarly extreme data anywhere else in Western Europe. The study also rendered it difficult to blame anti-Semitism exclusively on Muslim children, as it became evident that autochthonous Norwegians are also heavily involved.

After Jews, the next most pestered group was Buddhists, with 10 percent experiencing bullying; “Others” were at 7 percent and Muslims at slightly over 5 percent. Fifty-one percent of all students believe that the term “Jew” is used pejoratively, 41percent had heard ethnic jokes about Jews and 35 percent heard insulting comments. Close to 5 percent had been present when the Holocaust was denied in class. Only 25 percent of the students never witnessed anything negative about Jews in school.

All this happens in a country where among a general population of about 5 million, the membership of the organized Jewish community is only 800. The total number of Jews in the country which includes Israelis, who often leave after a few years, is estimated at 2,000.

For those who desired to know the truth, the findings came as no surprise. Already in 2002, Martin Bodd, a representative of the Jewish community in Oslo reported at an international conference of the Anti-Defamation League, that there had been more harassment of Jews in the preceding two years than at any time since 1945.

Bodd mentioned that “most of the incitement and harassment against Jews has not been reported. Hardly any of the children or the adults offended by anti-Semitic statements or the like are willing to come forward publicly.” He said that there were approximately 15 incidents in which 10 children had been harassed.

“Some Jewish children were told they would not be allowed to attend a birthday party because of Israeli actions. When there were anti-Semitic incidents at school, Jewish parents discussed this with some school principals, who supported the aggression. One told a Jewish girl to remove her ‘provocative’ Magen David. These incidents are important, but at present remain exceptions.”

Last year, a courageous TV journalist Tormod Strand, succeeded in convincing the state TV NRK to broadcast a program about anti-Semitism in primary and other schools. This broadcast focused mainly on bullying of Jews by Muslims.The teachers who discussed the ugly facts did so under the condition of anonymity. This was another indication of the Norwegian reality.

Kristin Halvorsen, Minister of Education and Leader of the Left Socialist Party reacted with surprise and said that this information was all new to her.

A few weeks later, the publisher of my book in Norwegian, “Anti-Semitism in Norway; Behind the Humanitarian Mask,” arranged a press conference in Oslo. This gave me an opportunity to ask the journalists present how it was possible that I, who lived far away and did not speak their language, have been aware of this problem in Norwegian schools for a long time, while their own minister did not. There was no reply.

I then felt as if I had to console them. I told them that this did not mean that I wanted to become minister of education in their country.

After the broadcast, Halvorsen ordered a national study on racism in schools, which is still underway. After the study of the Oslo municipality was made public, Halvorsen announced that she will provide more than $1,000,000 to familiarize teachers with the issue and how it should be handled in schools.

This effort is unlikely to be very successful. Halvorsen and her party colleagues are extremist anti-Israeli hate mongers. In 2006, she promoted a consumer boycott of Israeli goods. The Norwegian government had to distance itself from her statements after the then U.S. Secretary of State Condoleezza Rice threatened Norway with serious political consequences.

In 2009, when Halvorsen was Minister of Finance, she announced that the Norwegian government had decided that the state pension plan should divest from the Israeli company Elbit because it was involved in the construction of Israel’s security barrier.This was considered incompatible with the so-called investment ethics which had been laid down for the pension fund. At the same time however, the fund continued to hold shares in companies in other countries involved in highly unethical activities.

In 2009 during the Cast Lead war in Gaza, Halvorsen was the only Western minister to participate in an anti-Israeli demonstration. She was photographed standing close to someone holding a poster saying: U.S. and Israel – the Axis of the Greatest Evil.At the demonstration, shouts of “Death to the Jews” could also be heard.

The main question concerning the actions to be taken is: Can a minister with a continuing arsonist record become a fireman at the same time?

It is obvious to those who do not wish to close their eyes that widespread anti-Semitism in Oslo schools is directly linked to the extreme anti-Israel hate mongering in Norway expressed by government ministers, politicians, media, trade unions, academics, certain Church leaders and others.

One important subject not being investigated in the Oslo study is how many teachers discuss the Palestinian-Israeli conflict in class and to what extent their remarks are biased. This will probably serve to be another example of how arsonists may now simultaneously be taught to become firemen.

Dr. Manfred Gerstenfeld is Chairman of the Jerusalem Center for Public Affairs