After Flotilla, Israel Prepares for Pro-Arab Fly In 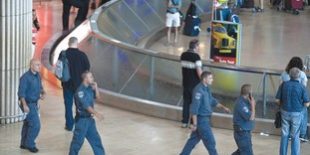 As the planned Freedom Flotilla 2 continues to fizzle, Israel is preparing for another provocation, this time in the form of a planned ‘fly in’ to Ben Gurion Airport by pro-Arab activists.

The planned aerial demonstration was first reported by the Intelligence and Terrorism Information Center (ITIC) last month. ITIC had reported that the PA is urging activists to converge en masse on Ben Gurion International Airport on July 8.

A report by AFP on Monday confirmed the planned fly in, saying pro-PA activists are planning to arrive by the hundreds at Ben Gurion Airport on Friday “to protest against Israel’s blockade of the Gaza Strip.”

The report noted Israel was making intense preparations for the fly in, and that Prime Minister Binyamin Netanyahu had ordered Public Security Minister Yitzhak Aharonovitch to coordinate all law enforcement and aviation authorities.

“This planned provocation will be dealt with in accordance with Israeli law and international law and conventions,” said a statement from the Prime Minister’s Office quoted by AFP.

The fly in comes after the planned flotilla to Gaza has been repeatedly met with obstacles.

On Monday, Greek authorities blocked a Canadian vessel from leaving its port and attempting to sail to Gaza.

The Tahrir, a Canadian vessel named after the square where the Egyptian revolution began earlier this year, sneaked out of the port of Crete Monday afternoon. It managed to sail about five kilometers, for about 15 minutes, before it was caught.

Last Friday, the Greeks stopped the U.S. flotilla ship ‘Audacity of Hope’ shortly after it left port. At least two other ships are unable to participate in the flotilla, having been disabled while in other ports.

One of the flotilla activists, Elsa Rassbach, was quoted by AFP as having said in a statement: “Hundreds of internationals on their way to visit Palestinians in Gaza have been prevented from departing from the ports in Greece. However, we hope that hundreds of others of us from many countries will succeed in reaching Palestine by flying to Ben Gurion airport in Tel Aviv.”

She added, “Supporting our visit to Palestine will be one small step toward bringing about the freedom of movement for all the peoples of Israel/Palestine that is essential for peace and justice in the Middle East.”

Earlier on Monday, the activists rejected an offer by Greece to guarantee the shipping of the aid on the ships to Gaza.