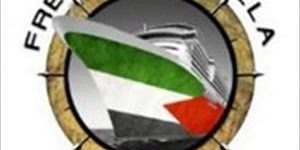 For the second time in recent days, a Gaza-bound ship attempted to leave its Greek port without authorization en route to the Strip, prompting Greek forces to stop it at sea.

This time it was the Canadian Tahrir vessel, which left Crete Monday afternoon and headed towards Gaza, before being taken over by Greek Coast Guard forces. The ship was able to sail for some 15 minutes before it was stopped.

Activists on board the Canadian vessel announced that they left the port around 6 pm. A few minutes later, they said that a Greek Coast Guard ship was giving chase and approaching them. A short while later, Greek forces boarded the Gaza-bound vessel.

Activist Dror Feiler said the boat that tried to leave Monday was carrying Canadian activists and was encircled by Greek vessels shortly after leaving the harbor. He said the boat is named “Tahrir,” after the Cairo square that became a center of protest against the Egyptian government this year.

Activists were upset at Greece, saying that it had no right to enforce the blockade imposed on Gaza. They said that they were able to sail some five kilometers before being stopped. The ship was reportedly carrying some 50 people.

On Friday, heavily armed Greek forces stopped another Gaza-bound vessel, this one carrying American and Israeli activists, after it left port without authorization. Activists on board that ship were able to sail for some 25 minutes, before commandos arrived and later boarded the vessel. The boat’s captain was detain and may be indicted.

Greek authorities have said that ships carrying activists destined for Gaza with aid for Palestinians were prohibited from leaving Greek ports.