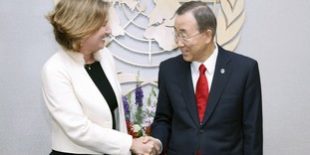 Livni said that anyone who wants to aid Gazan civilians should do so via the proper channels, rather than “grave provocations” like the flotilla.

She went on to say that the flotilla was a provocation which was not going to help anyone, and called on the international community to send out a clear message that this flotilla and future flotillas are “unacceptable.” She stressed that such initiatives must be prevented and stopped.

Regarding humanitarian aid to the Strip, she said shipments should be sent through the proper channels, and not by breaking the naval blockade.

The two also discussed Palestinian plans to ask the UN to vote on statehood in September, and Livni told Ban that “unilateral moves” are not productive for either side.

Also Thursday, Foreign Minister Avigdor Lieberman said that the participants planning to sail on the upcoming Gaza flotilla are motivated by hate for Israel rather than genuine concern for the Palestinians in Gaza.

In an interview with Israel Radio, Lieberman said the participants are not interested in facts and reality about life in Gaza, but rather refuse to accept the existence of Israel and seek to be provocative and potentially violent.