The flotilla and the third intifada 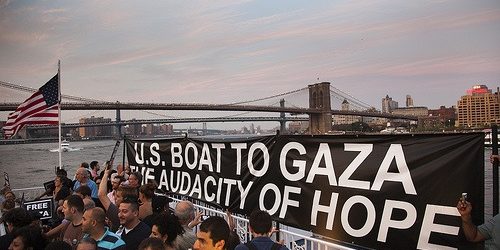 Is a bunch of young Israeli lawyers working round the clock sustained only by Diet Coke, falafel and cigarettes about to pull off the legal equivalent of the Six-Day War?

Israel famously won that war before it even started by destroying the Egyptian air force on the ground. Now it’s beginning to look as if the Gaza flotilla of fools and fanatics may be holed below the waterline before it even sets off on its cynical and potentially murderous stunt.

It was supposed to have sailed by now. Today, however, it was reported that it now may not set sail before next week. The main reason is a series of unprecedented and ingenious manoeuvres by Israeli lawyers which have tied up the boats in legal actions mainly concerning insurance and registration issues.

And I can reveal that a separate legal move today threatens fourteen of the flotillistas with arrest if they enter Israeli territorial waters.

Two Israeli soldiers in the reserves are seeking to bring a private prosecution against those activists who took part in the first Gaza flotilla — and who are planning to take part once again in the current one — for the crimes of assault and soliciting aid for an attack.

The fourteen comprise one person from Ireland, two from the US, one from Cyprus, two from England, two from Spain, one from Greece, two from the Netherlands, one from Norway, one from Sweden and one from Qatar. Separately, the captains of the flotilla boats also face the possibility of criminal charges from a similar attempt at a private prosecution.

In addition, the US Attorney General has threatened the 36 Americans on the flotilla that they will be liable for criminal prosecution if they sail.

Already, the number of flotillistas has been whittled down from 1500 to 350, and the number of boats from 15 to ten. Most of the credit should surely go to the Israeli activist law firm Shurat haDin which believes in bankrupting terrorism through a creative use of the law. Here are some of the legal challenges to the flotilla which Shurat HaDin has initiated with seismic effect.

•It sent letters to all the maritime insurance companies in Europe and Turkey, warning them that if they provided the flotilla boats with insurance (a necessary component in the effort to smuggle contraband to the terrorists) that they themselves would be legally liable for any future terrorist attacks perpetrated by Hamas.

•It filed an unprecedented lawsuit to seize the flotilla boats. The lawsuit was filed on behalf of an American terror victim injured by a Palestinian suicide bomber.

•It sent warning letters to a French insurance company warning it not to insure a boat that was to be launched from Marseilles. The company accordingly decided not to provide the French boat with insurance.

•After the main Turkish boat the Mavi Marmara pulled out of the flotilla, the New York Times reported that one reason (along with political pressure) was the boat’s inability to obtain maritime insurance.

•It sent warning letters to the UK and US based global satellite company INMARSAT, stating that it might be liable for massive damages and criminal prosecution if it provided communication services to ships used by suspected terror organizations in the flotilla. Then a resident of the southern Israeli town of Sderot filed a legal suit asserting that, under US law, Inmarsat was aiding and abetting terrorism by providing satellite services to the flotilla vessels.

•This week the New York Times reported that Greek authorities had detained two of the ships docked in Greece, including an American vessel, after Shurat haDin complained to the Greek Coast Guard suggesting that seven of the ships might be lacking insurance or were improperly registered.

For the flotilla is out to provoke violence and mayhem. The claim that its mission is a humanitarian one to relieve Israel’s ‘siege’ of Gaza is patently ludicrous. There is no siege. Israel allows in regular supplies, and Egypt recently opened its own Gaza border. No, the flotilla’s real aim by its illegal breaking of the legal maritime blockade of Gaza is to provoke Israel into violence against those on board so that they can pose as martyrs and will thus trap Israel into blackening its own image.

Yet however transparent the flotilla’s real purpose, the media are sanitising its true aims and potential for violence, as Just Journalism spells out here and here.

Well, the true aim was actually spelled out by Adam Shapiro, co-founder of the International Solidarity Movement and a board member of the Free Gaza Movement (which is behind the flotilla), at a meeting last November at Rutgers university in New Jersey to raise money to fund an American flotilla boat. I have obtained a video of this address (no link, I’m afraid). This is what Shapiro said:

What we’ve been doing over the last ten years with the International Solidarity Movement, Free Gaza, and all the other outgrowth organisations and movements and groups is to …work with Palestinian society to ramp up the resistance. This is all part of a Palestinian movement for Palestine…This is truly an international movement … It’s only Palestine, this cause that has been going on for over 60 years, that generates this kind of activism, this kind of resistance…

So from the horse’s mouth we learn that the prime aim of the flotilla is not to provide humanitarian supplies to Gaza. It is not even to protest Israel’s ‘siege’ of Gaza. It is instead a tactic in a campaign to undermine Israel itself on account of its 60-plus year existence as a Jewish state. In other words, the flotilla is part of a strategy designed to destroy Israel altogether.

All decent people should hold their breath that Shurat haDin pull this one off, and turn ‘lawfare’ into a boomerang against the jihad and its nauseating fellow-travellers whose true aim is to exterminate the national homeland of the Jewish people.