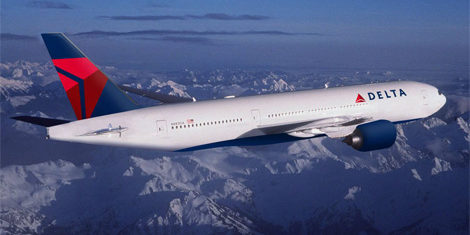 The issue, which has caught the attention of the American Center for Law and Justice already, was raised when Washington attorney Jeffrey Lovitky was perusing airline procedures for travel.

“As we learn more about the issue and facts, we are determined to ensure that American citizens do not face discrimination by airlines like Delta that are passenger code-sharing with Saudi Arabian Airlines, said Colby M. May, director and senior counsel of the ACLJ.

“We will be communicating our position with members of Congress, the State Department and Delta Air Lines to ensure that the rights of American citizens are protected,” he said.

The issue first was presented to Congress, the public and others by talk radio host and former U.S. Rep. Fred Grandy, whose own battle against discrimination was documented when his former radio station demanded he tone down criticism of Islam on his program. He then left the station.

Grandy and “Mrs. Fred,” – Catherine – recently were interviewed by Talk 1200 show host Jeff Katz about the controversy, which was described as “outrageous.”

“Creeping Shariah? “Now jetspeed Shariah. Hat’s off to Delta. It looks like Delta will be the first Shariah-compliant airline in the United States,” Catherine Grandy said.

Katz noted, “As a Jewish man, I might not be able to fly on Delta Air Lines in the future.”

Fred Grandy told Katz that he spent time already this week in Washington briefing members of Congress and other policy makers “on this kind of threat.”

“This creeping Shariah, economic jihad, gets you everywhere you turn,” Catherine Grandy said. “This is just not right. I’m sure this will be tested.”

Fred Grandy said there were several questions raised by the controversy, including would passengers continue to fly on Delta, what should the government do and the advance of Shariah in the United States.

“If this isn’t one landing strip at a time, I don’t know what is,” he said.

Delta officials did not respond to a WND phone call asking for comment, but their sentiment is clear in letters they wrote to Lovitky when he complained about their plans.

Lovitky told WND that he personally raised the issue with the Delta CEO Richard Anderson when he discovered the plan while making travel arrangements. He said Anderson didn’t respond, but Kathy M. Johnston, a coordinator for the airline’s “Customer Care” did write a letter.

She blamed the plan to discriminate on Saudi Arabian requirements and said Lovitky should consult the State Department.

“Delta must also comply with all applicable laws in every country it serves and by the same token passengers are responsible to obtain the necessary travel documents required for entry into another country prior to their day of travel,” she wrote. “If a passenger travels without proper documents, the passenger may be denied entry into that country and our airline may be fined. Delta assumes responsibility for ensuring that each passenger boarding our aircraft has the proper documents for travel to their ticketed destination.”

Lovitky told WND that whatever discrimination the Saudis choose to enforce in their nation, it becomes a problem when Delta applies it to American citizens on American soil.

“Delta Air Lines acted in a purely voluntary manner in agreeing to this alliance with Saudi Airlines,” he wrote in a letter asking the Delta board to act on the matter. “Accordingly, Delta has made itself responsible for ensuring that passengers on any flight jointly operated with Saudi Airlines will not be subject to discrimination on the basis of their gender, religion, or any other inappropriate grounds.”

He told WND he has not yet heard back from the board members he contacted, nor have specific action plans been adopted by the ACLJ. But he noted the other restrictions that could be forced on Americans at Washington’s Dulles airport and New York’s JFK.

The restrictions could include clothing requirements for women and banning passengers from “carrying and reading religious literature of their choice.”

“This includes, but is not limited to, both Christian and Jewish sacred texts, such as the Old Testament and the New Testament, as well as any objects that reflect their religion, such as a cross necklace,” Lovitky said.

“You can imagine how foreign it is to our values as Americans,” he told WND. “To adhere to restrictions of this nature is extremely burdensome.

“This needs to be addressed in a way which is consistent with our Western values,” he said.

But Lovitky pointed out to Delta that Congress recently considered a plan to address Saudi Arabia’s discrimination, noting the government there confirms visas will not be issued for an Israeli passport holder or a passport that has an Israeli arrival/departure stamp, “those who don’t abide by the Saudi traditions concerning appearance and behaviors” and “Jewish People.”

“Delta is prohibited from engaging in religious discrimination by a variety of state and federal laws, as well as its own Code of Ethics,” he wrote. “However, Delta would be directly involving itself in the most heinous form of religious discrimination if it were to enter into any code share or other reciprocal travel arrangements with any airline which refuses boarding to individuals of specific religious persuasions.

“I urge Delta to shun any reciprocal travel arrangements with Saudi Arabian Airlines until the government of Saudi Arabia provides assurances that persons who acknowledge being Jewish on their visa applications will be granted visas.”

He also was upset that Delta’s response to a followup letter was to say, “we respectfully consider this matter closed and we will not be responding to this matter again.”

Grandy previously had a talk show on WMAL in Washington, on which his wife was a periodic guest to discuss “creeping Shariah,” the advance of Islamic law in the U.S.

Some of her comments have been posted on YouTube.

Already, in the United Kingdom, Shariah courts are given authority to resolve certain issues outside of ordinary judicial proceedings. Islamic law, as it is practiced in many Muslim countries, includes penalties such as the chopping off a hand for thievery and execution for adultery and abandoning Islam.

The Muslim Brotherhood’s stated goal is to restore the caliphate, the Islamic empire under Ottoman Turkish rule for five centuries, and expand it throughout the world.

Grandy said his wife was “the one running point on this,” joining the show every Friday.

Grandy said his wife would discuss issues in the news, such as Christian missionaries who were arrested in Detroit for attending a city-sponsored “Arab Fest” and discussing their religious faith as well as a Tulsa, Okla., police officer who said he was demoted for refusing to attend an Islamic religious event and prayer service as ordered by his department.

“We had FBI agents calling after the show, ‘We’re glad you’re talking about this. We’re not even getting this in our briefings,'” Grandy said.

The former congressman said the situation reached a climax in February after the show supported a large public forum on the agenda of radical Islam in the United States.

At the forum, a number of experts discussed Shariah, Islamic fundamentalism and other topics.

“To our amazement, we got back to the station told to tone it down,” he said. But because of the importance of the issue, his wife continued raising questions, and was told, “You’re off the show.”

Grandy said he was told to take or leave it and, “I left it.”

The Washington-based Council on American-Islamic Relations, or CAIR, routinely criticized Grandy for reading on air FBI reports and federal court documents identifying the group as an “unindicted co-conspirator” in the federal Holy Land Foundation terror finance trial and a member of the “U.S. Muslim Brotherhood.”

“CAIR has been identified by the government at trial as a participant in an ongoing and ultimately unlawful conspiracy to support a designated terrorist organization – a conspiracy from which CAIR never withdrew,” wrote assistant U.S. Attorney Jim Jacks, who won an award from Attorney General Eric Holder for convicting the Holy Land terrorists.

As a result, the FBI cut off all ties to CAIR’s national office and its 30 chapters around the country.

WND also has reported about a suspected case of honor killing in which authorities suggested a woman died by beating her own face and an opinion from a leading Muslim that to chop off the hands of a thief is “compassionate.”

Also, there are those who are warning that Islam is coming to the United States, whether citizens like it or not.

There also is a recent report that documents how dozens of mosques around the United States have been identified in a new study as incubators for jihad against America, with more than 80 percent of those surveyed advocating violence.

“How’s this for a wake-up call?” asked Frank Gaffney, president of the Center for Security Policy, in a commentary in the Washington Times.

“America’s most cherished civil liberties and the Constitution that enshrines them are enabling Muslim Brotherhood operatives and other Islamists who have the declared mission of destroying our freedoms and government ‘from within … by hands.’ Specifically, our enemies are using our tolerance of religion to create an infrastructure of mosques here that incubate the Islamic holy war called jihad.”

Among the findings in the study, “Shariah and Violence in American Mosques” by Kedar, an assistant professor at Bar Ilan University in Israel, and Yerushalmi, the general counsel for Center for Security Policy, were that:

•Mosques identified as being more Shariah-adherent — that is, their imams wore beards, they segregated men from women and the like — were more likely “to feature violence-positive texts on-site.”

•In 84.5 percent of the mosques, the imam recommended studying violence-positive texts.

•Of the 51 percent of the mosques with texts severely advocating violence, 100 percent were led by imams who recommended that worshippers study texts promoting violence.

“Such findings strongly suggest that Shariah-adherence is a useful predictor of sympathy for – and, in some cases at least, action on behalf of – jihad, to include both the Islamists’ violent or stealthy forms of warfare aimed at supplanting the U.S. Constitution and government,” Gaffney said. “Indeed, the study confirms the anecdotal reports by Muslims themselves and earlier, less rigorous empirical studies of Saudi hate-filled literature permeating mosques in the United States.”